I’ve seen I think three different covers for Ammonite. One is rather generic and I suppose doesn’t really count. One is with an ammonite with blues and blacks with small bits of white and one is of a woman wearing some kind of gauzy full length garment walking along a beach done in pastel tones.

What I want to know is which do you prefer or like best? 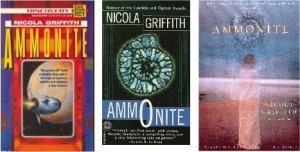 By ‘generic’ I assume you mean genre: the original Del Rey cover in orange and yellow and red with a jellybean spaceship front and centre. I didn’t like that one–I had my heart set on a fossil, and gorgeous blues and gold and silver–but, wow, it sold brilliantly for a first novel: well over 25,000 copies in the first few months. So I stopped complaining. The marketing people at Del Rey clearly knew their business.

Two years later, the reissued mass market paperback, designed to be published in tandem with the brand new Slow River hardcover, was cool because stylistically it matched the biologically-focused SR. But it dated really fast and, well, it still didn’t have a fossil on the cover.

When Stay was being published, a few years later, Del Rey thought it would be good for the Little Book That Could to vaguely match that. They published a whole new, trade paper edition, and made it look much less science fictional: the woman wandering barefoot on the beach in a bedsheet look.

None of these covers work that well for me. But the cool thing is that they attracted different readerships, so it seems churlish to complain. But my favourite Ammonite cover, hands down, is the one I designed for the UK:

I forget who did the actual artwork but it was more or less exactly what I’d drawn in stick figures. I think it really represents the book (clearly the Germans thought so, too–they used the same artwork). On some level, though, they’re all beautiful to me; they’re all my first novel.

Posted on August 12, 2008 by Nicola Griffith in Uncategorized