Here’s a story about another Dr. Scientifical Meanie Pajamas taking all the fun out of life: 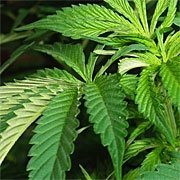 A new type of drug could alleviate pain in a similar way to cannabis without affecting the brain, according to a new study published in the journal Pain on Monday 15 September.

The research demonstrates for the first time that cannabinoid receptors called CB2, which can be activated by cannabis use, are present in human sensory nerves in the peripheral nervous system, but are not present in a normal human brain.

Drugs which activate the CB2 receptors are able to block pain by stopping pain signals being transmitted in human sensory nerves, according to the study, led by researchers from Imperial College London.

Previous studies have mainly focused on the other receptor activated by cannabis use, known as CB1, which was believed to be the primary receptor involved in pain relief. However, as CB1 receptors are found in the brain, taking drugs which activate these receptors can lead to side-effects, such as drowsiness, dependence and psychosis, and also recreational abuse.

“Our new study is very promising because it suggests that we could alleviate pain by targeting the cannabinoid receptor CB2 without causing the kinds of side-effects we associate with people using cannabis itself.”
(thanks, Cindy)

So why (why why why) do doctors always want to take the fun out of these things? Why can’t we giggle and eat crap as well as be free of pain? It’s that whole Puritan streak coming out again: no delight allowed. Tuh. Oh, and I also read this story about cannabis crops:

One 2006 study called cannabis the top cash crop in the nation, worth more than corn and wheat combined. It was the leading crop in 12 states, outstripping grapes in California and tobacco in North Carolina, and one of the top three in 18 others, coming in just behind apples in Washington and cotton in Georgia…

The Puritans have a lot to answer for. Prohibition was stupid. The ‘war against drugs’ is stupid. Small dogs are stupid (okay, that last one was a bit random but, hey, it’s true). Well, fuck that. Time to go giggle and eat rubbish…

Posted on September 16, 2008 by Nicola Griffith in Uncategorized

20 thoughts on “time to giggle and eat rubbish”