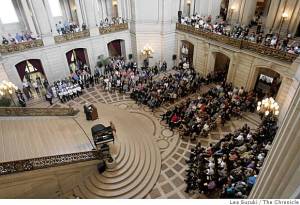 On Wednesday, nearly half a century later, an honor guard made up of members of the police, fire and sheriff’s departments helped celebrate her life at a packed memorial service inside San Francisco City Hall

“There is not a lesbian, gay, bisexual or transgender person on this planet whose life is not better because of Del Martin,” Kate Kendell, executive director of the National Center for Lesbian Rights, told the overflow crowd.

I first read about Del Martin when I was 20 years old, 28 years ago. She and Phyllis Lyon are giants. I delight in a world that will finally acknowledge that publicly, with civic honours. I’m glad I live in a time and place that will seat her sweetie next to the mayor.

Posted on October 8, 2008 by Nicola Griffith in Uncategorized

3 thoughts on “in memory of a giant”