Last night we watched, for the zillionth time, the first disc of The Fellowship of the Ring. I was reminded of this map I saw a while ago, found here (but originally put together by Peter Bird–and pointed out to me by a reader, though I’m sorry to say I can’t remember who): 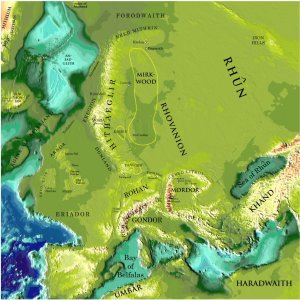 • The Shire is in the South-West of England, which further north is also home to the Old Forest (Yorkshire?), the Barrow Downs (north of England), the city of Bree (at or near Newcastle-upon-Tyne) and Amon Sul (Scottish Highlands).
• The Grey Havens are situated in Ireland.
• Eriador corresponds with Brittany.
• Helm’s Deep is near the Franco-German-Swiss border tripoint, close to the city of Basel.
• The mountain chain of Ered Nimrais is the Alps.
• Gondor corresponds with the northern Italian plains, extended towards the unsubmerged Adriatic Sea.
• Mordor is situated in Transylvania, with Mount Doom in Romania (probably), Minas Morgul in Hungary (approximately) and Minas Tirith in Austria (sort of).
• Rohan is in southern Germany, with Edoras at the foot of the Bavarian Alps. Also in Germany, but to the north, near present-day Hamburg, is Isengard. Close by is the forest of Fangorn.
• To the north is Mirkwood, further east are Rhovanion and the wastes of Rhûn, close to the Ural mountains.
• The Sea of Rhûn corresponds to the Black Sea.
• Khand is Turkey
• Haradwaith is the eastern part of North Africa, Umbar corresponds with the Maghreb, the western part of North Africa.
• The Bay of Belfalas is the western part of the Mediterranean.

Personally, I’ve always thought of the hobbits as being from Yorkshire (Tolkien spent much of his professional life in Leeds), so maybe one day I’ll redraw all this. For now, though, it’s fun to consider. And I’ll be watching disc 2 tomorrow.

Posted on November 1, 2008 by Nicola Griffith in Uncategorized