Wow. In Engadget, a picture and paragraph about what looks very like a newstank from Slow River, though I imaged them as a bit bigger, and, well, rounder, and the city wasn’t all post-apocalyptic. But despite those differences, the basic notion is the same, and I think that’s *awesome*: 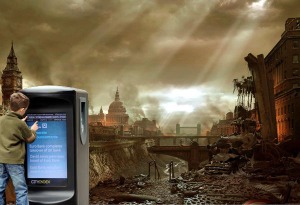 London will be the first city to test out new bomb-proof garbage cans, which are also going to multitask as recycling bins with LCDs that stream travel info and news. Security concerns (AKA fear of terrorists dropping bombs in them) have kept rubbish bins out of subway stations and many of the city’s streets since the mid-80’s, causing frustration among citizens, not to mention what amounts to forced littering. The new cans, developed by British company Media Metrica, weigh one ton each, and were tested in the lifeless deserts of New Mexico for five years to ensure they are completely, totally indestructible, can absorb heat from explosives, prevent shrapnel spread, and extinguish “fireballs.” Eh. Put ’em in New York City — someone will surely figure out how to utterly destroy them in 24 hours or less.

Here’s the first chapter of Slow River, so you can read for yourself Lore waking up naked in the rain, in the light of a newstank. Or here’s me reading it.

I think this is very, very cool. Now if someone would just build the bioremediation water reclamation plants…

Posted on November 6, 2008 by Nicola Griffith in Uncategorized

7 thoughts on “the newstank is here!”