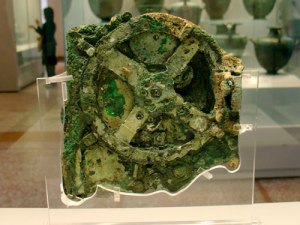 Okay, here’s a post I wrote two weeks ago and just sort of forgot, perhaps because I first read about the lump of bronze-discovered-to-be-a-machine years ago in Archeology.

The New Scientist (love that magazine–nicely written, good illustrations, witty photo captions, a bit like The Economist for science geeks) has an article about the antikythera, an ancient (way more than two millenia) mechanical computer:

MARCELLUS and his men blockaded Syracuse, in Sicily, for two years. The Roman general expected to conquer the Greek city state easily, but the ingenious siege towers and catapults designed by Archimedes helped to keep his troops at bay.

Then, in 212 BC, the Syracusans neglected their defences during a festival to the goddess Artemis, and the Romans finally breached the city walls. Marcellus wanted Archimedes alive, but it wasn’t to be. According to ancient historians, Archimedes was killed in the chaos; by one account a soldier ran him through with a sword as he was in the middle of a mathematical proof.

One of Archimedes’s creations was saved, though. The general took back to Rome a mechanical bronze sphere that showed the motions of the sun, moon and planets as seen from Earth.

The sphere stayed in Marcellus’s family for generations, until the Roman author Cicero saw it in the first century BC. “The invention of Archimedes deserves special admiration because he had thought out a way to represent accurately by a single device for turning the globe those various and divergent movements with their different rates of speed,” he wrote. “The moon was always as many revolutions behind the sun on the bronze contrivance as would agree with the number of days it was behind it in the sky.”

Until recently, historians paid scant attention to this story: the description suggests a sophisticated mechanical device, beyond anything the ancient Greeks were thought to have been capable of. Furthermore, Cicero had no technical training, and did not explain how the device worked. He could have made the story up for effect.

Now, however, research on the battered remains of a mysterious ancient device suggests that Cicero was telling the truth.

I know that half of you don’t bother clicking through to articles I link to, so here’s a video explaining how it works:

And if even video is a bother, I’d like to recommend a novel about Archimedes by Gillian Bradshaw, The Sand Reckoner. Bradhshaw also wrote a most marvellous Arthurian novel, Hawk of May, which I can recommend wholeheartedly. Go on, go buy it. It’s perfect for lazy, take-you-away-from-it-all holiday reading.

But the novel I’m really reminded of by the discovery of this machine is Mary Gentle’s Ash: A Secret History. It’s usually sold chopped into four parts (which is how I read it) but really it’s one huge story. Here’s the amazon.com reviewer’s most excellent description of Book #1:

Mary Gentle first came to prominence with the lovingly conceived and beautifully written SF novel Golden Witchbreed. Its sequel, Ancient Light, then took the world and premise built into the first novel and deconstructed it thoroughly. Gentle’s latest plays some of the same tricks with reader expectations.

In a typical fantasy milieu, the mud and blood of a military camp in 15th-century Europe, a scarred and beautiful 8-year-old girl kills her two adult rapists. She is Ash. In unflinching prose, Gentle describes the child’s treatment in a men’s camp, then the teenager’s hard lessons in the art and craft of war, and finally the young woman’s rise to command a mercenary army. Ash, it seems, is not only strong and fast but has the advantage of hearing a voice that instructs her on troop deployment. To the well-versed SF reader, the voice begins to sound suspiciously like a tactical computer.

Just as the reader gets ready to reassign the book to time travel SF, Gentle inserts–in what are purported to be excerpts from a 21st-century scholar’s e-mail conversation with his publisher–hints that perhaps the novel belongs in the alternate history category. By now Ash and her army are embroiled in war and politics up to their fluted breastplates (armor, like all the historical detail, is minutely and accurately described), and if swords and poleaxes were not enough, she now faces golems and the Carthaginian army. Amazingly, Gentle makes this impossible mix believable, and by the end of the novel it is apparent that this is the beginning of a most interesting series. — Luc Duplessis

If you have a gift certificate, go buy this book. It doesn’t flinch from some of the realities of war, nor does it wallow. Enjoy.

Posted on December 26, 2008 by Nicola Griffith in Uncategorized