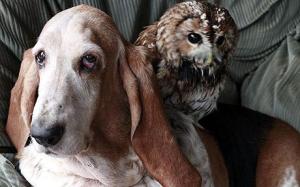 In the Telegraph, an article about a rescued Bassett Hound and an owl who watch tv together:

The pair have become inseparable since meeting at an animal refuge, and are quite happy to cuddle up together on an armchair.

Beryl the Basset Hound, who is a grand old dame at 16 years old, and four-year-old tawny owl Wol struck up a friendship when their owner realised they both loved watching television in the evenings.

I’m hoping this is a good omen for 2009. It’s not exactly the lion lying down with the lamb, but it’s close enough for government work. Plus it’s just really pleasing to me on a level I can’t articulate.

Posted on January 4, 2009 by Nicola Griffith in Uncategorized

10 thoughts on “Wol and Beryl watch the soaps”