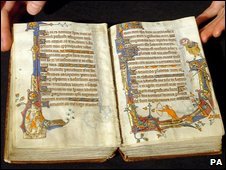 The BBC tells us that the oldest words in English have been identified. (Via Heroic Age.) I feel as though I should show a series of mugshots of scowling words with bad hair and greasy skin…

Reading University researchers claim “I”, “we”, “two” and “three” are among the most ancient, dating back tens of thousands of years.

Their computer model analyses the rate of change of words in English and the languages that share a common heritage.

The team says it can predict which words are likely to become extinct – citing “squeeze”, “guts”, “stick” and “bad” as probable first casualties.

Which words do you think deserve to last forever? Which would you expunge tomorrow if you could? Today I’m enjoying ‘unctuous’ (sadly more Latin than English).

Posted on February 28, 2009 by Nicola Griffith in Uncategorized