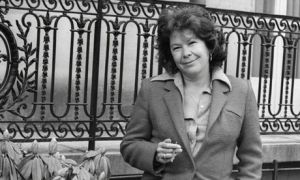 According to this Guardian article, Marilyn French died yesterday.

Yesterday I was called by a friend at the Guardian, telling me that Marilyn French, author of the feminist classic, The Women’s Room, had died. I was tramping the wet fields of Sussex, looking for a lost dog, worried that the roast I’d slung in the oven was probably burning. It seemed both a peculiarly domestic setting to hear of the death of so important, so radical, a writer – and, at the same time, strangely appropriate.

Later I looked out my old Sphere edition of French’s iconic novel of 1977. Battered and tatty, the silver mirror cover was still easy to find on my crowded bookshelves. The title, in bright yellow capital letters, against a black silhouette of a keyhole; the strap line – This Novel Changes Lives – in a bigger typeface than the author’s name. I thumbed through it with affection, and an odd sadness for the passing of a woman I’d never met. I had memories of smoky autumn afternoons in damp student digs in 1982, spent reading the novel for the first time. It was unlike anything I’d ever read before.

I read The Women’s Room when I was eighteen. It bored me rigid. But all around me, women were being astounded at having their experience named so boldly. The book excavated their anger, polished it, gave them a handhold–a place to grip it and wield as weapon.

For me, though, eh, I was eighteen. I’d never cared about what men think of me. I’d never truckled to the dominant paradigm: I hadn’t had a real job (and the only sexual harrassment I ever got–that is, the only stuff I noticed–was from a woman, which made me blink, then laugh, then tell her to Fuck Off). In other words, the book wasn’t intended for me. But for those it was meant for, wow, it hit hard.

Penguin are rereleasing this novel in August, with a foreword by Dorothy Allison. If you haven’t read it, I recommend that you do. If it’s about you, you’ll weep with relief. If it’s not about you, you’ll learn something–you’ll walk in others’ shoes, understand how it felt to grow up female in the twentieth century. So buy a copy, and drink a toast to the woman who changed so many lives thirty years ago.

Posted on May 6, 2009 by Nicola Griffith in Uncategorized