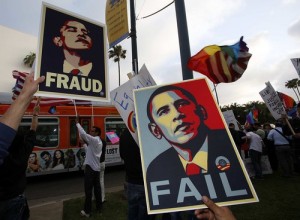 Tonight, President Obama is scheduled to announce benefits for same-sex partners of federal employees. The Los Angeles Times says this will include health benefits. The New York Times thinks, eh, no it won’t. And last week Obama’s Department of Justice, in defending DOMA, spoke of same-sex couples in the same breath as those who practise incest or might wish to marry children.

So what’s going on? Frankly, I have no idea. I can’t find a coherent story in this mess. I don’t think there is one.

There’s a lot going on in the world at the moment–climate change (we’re all going to die!), weaponisation of plutonium in North Korea (we’re all going to die!), proto-revolution in Iran (they’re all going to get killed!), healthcare reform (we’re all going to be left to die poor and alone!), etc.–but this lack of clear strategy on one relatively simple issue is worrisome. It’s also, of course, pissing me off. Because this really is a simple issue. We’re human being who are being discriminated against. Polls show the electorate is finally beginning to understand that, and are coming to side with us; legislators are mostly willing, and, besides, the Democrats have control of both houses so Obama could make it happen if he was willing to commit. So why is the administration fumbling the ball?

I don’t know. I hate not knowing. Does anyone out there know something I don’t?

Addendum. Here’s a HuffPo piece on what Obama should say tonight. I hope he does.

Posted on June 17, 2009 by Nicola Griffith in Uncategorized

27 thoughts on “I am confused. Obama is confused.”