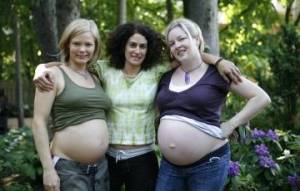 From the Globe & Mail:

The premise of the mockumentary may be fictional, but with the speed at which stem cell research is evolving, could same-sex human reproduction one day become reality? And should it?

Scientists have already taken the first baby steps toward realizing this brave new, and some would say controversial, world of conception.

Possible? Eh, not really. Will some variety of this be possible in the future? Yes. The near future? Unlikely. But, wow, if this tech had been real 40 years ago, I’m pretty sure I’d be a mother (or a father–oh, dear, how would one parse all that?). I wouldn’t have been able to resist the lure of gene mixing with the beloved. God, I’d probably have six children. A whole alternative life has flashed before me. Aaargh!! Must now go drink a gallon of tea and eat chocolate or my brain will fly into teeny tiny pieces…

Posted on June 19, 2009 by Nicola Griffith in Uncategorized