It’s still too hot to think here. It’s going to be even hotter than originally believed (I use the word advisedly; see below). The forecast for the next few days: 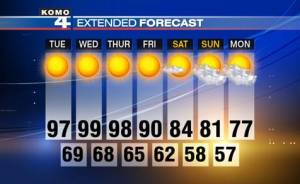 which made me think of this article in The Atlantic about planet-wide engineering solutions to global warming.

As the threat of global warming grows more urgent, a few scientists are considering radical—and possibly extremely dangerous—schemes for reengineering the climate by brute force. Their ideas are technologically plausible and quite cheap. So cheap, in fact, that a rich and committed environmentalist could act on them tomorrow. And that’s the scariest part.

The lunatics’ argument goes something like: Hey, we changed the earth’s climate (turned the last 200 years into the ‘anthropocene period’) so we should, y’know, just change it back. I assume I’m not the only person who trembles in her boots at such a thought. Don’t people learn anything? Just look at huge projects like the Three Gorges dam. They always, always have unexpected (usually miserable) consequences.

I’ve just read an interesting opinion piece in The New Scientist about attitudes to climate change. I’m too hot and cross to summarise the whole thing, but essentially the commentator explains why people in general don’t believe in climate change, and why that’s a bad thing. I think he’s mostly right, but forgets that people tend to believe what is convenient, and climate change–unless you’re an olive grower in England–is bloody inconvenient.

I tell you: I believe in climate change. It may hit 100 degrees here in Seattle on Wednesday. One hundred degrees. In Seattle.

Posted on July 27, 2009 by Nicola Griffith in Uncategorized

10 thoughts on “the anthropocene period”