I’ve been sitting on the deck in the sun, watching, listening, comparing today’s garden and ravine sights and sounds with those of September. (Yes, it’s really been six months since it’s been warm enough to spend happy nothing time out there. It’s Seattle. I expect it’ll be a while longer until we need to unfurl the sunbrella.) 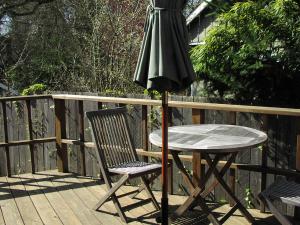 There are more birds, many more birds. When we first moved here, five years ago, there were no Steller’s Jays around here. Three years ago, one pair arrived. Last year there were, I think, two pairs. Now there are many. And they’re loud. But, ah, they’re so very very blue I’ll forgive them anything. There was a pair of tits playing a mating dance–or perhaps a cross your-turn-no-your-turn parenting squabble about bringing home the worms; hard to tell–around the neighbours’ blossoming plum tree. It needs pruning (that rust-and-wine tree behind it might be dogwood): 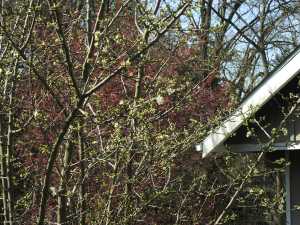 There’s a new species of new bird in the ravine. I didn’t see it, but I heard it: something between the metallic wah-wah of a jay and the high, falling kiii of a hawk. I haven’t a clue what that could be. Also new: someone in the hood has started keeping chickens. I heard, from far, far away, a rooster cock-a-doodledo-ing.

Woodpeckers are out in force, flickers mainly, and a couple of sapsuckers, drumming their manly brains out to attract the girls.

No sounds of construction. Yet. Though lots of lawn mowers all fired up–plus the first tourist seaplane of the season scaring the shit out of paying customers by flying low over the sound (or the Salish Sea, depending).

The crows were clearly off about their business somewhere else–hey, all weather is kegger weather.

The torture tree has the faint beginning of blossom–way early. Early, too, is the lilac. Here’s a pic of the mishmash of trees fighting it out in the neighbour’s yard: lilac, bamboo, laurel, and at the top right, curly willow. It’s all blooming madly, and I’m really allergic to tree pollen but, weirdly, I was fine out there today. 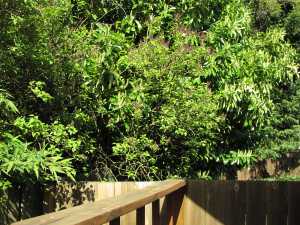 Yep, if it were up to me I’d prune all those trees, but it’s not, and I kind of like seeing the wild profusion and ecological struggle. Sadly, I don’t think the curly willow is doing as well as I’d like.

The alders–usually late to leaf, though not as late as the torture tree–are turning green at the crown, but it looks as though two of them are dying gradually from the top down. They’re old, and tall, and magnificent. Ah, well, they look good for another year or two.

I didn’t see any squirrels; perhaps there’s a new cat in the neighbourhood, or perhaps the raccoons have been hungrier than usual. Or, if they’re desperate, I suppose it could be the coyotes. They were out in force last night. After Kelley fell asleep I opened the bedroom windows and listened to them yip and yowl–I think they might have pups–and fell asleep lulled by the cold, briny scent seeping up the ravine and the rustling of some small rodent in the rosemary bush.

Two changes I’m not happy about. There are already too many bugs: lots of wasps, flies, and tiny spiders; I think it might be skeeter hell here this summer if we get any rain. The Douglas firs in the commons running down to the ravine look awful. They were planted years ago–long before we got here–but a troop of Boy Scouts. Unfortunately, the scouts planted them right by the power line that runs across the ravine. The city come out late last year and, despite protests, brutally topped all four trees. We’re not going to have as much shade this summer. Our A/C bill will be insane. Perhaps we should paint our roof white as one of our neighbours did last summer.

At some point, too, we’ll have to do something about the moss around here–pressure wash the concrete driveway, regravel the walkway along the fence, scrape it off the shed roof–but, eh, not today. Today is for blinking and smiling and falling in love, all over again, with Ravine World.

I hope your day is proving as lovely as mine.

Posted on March 24, 2010 by Nicola Griffith in Uncategorized