On Sunday, Kelley and I had friends over for dinner to celebrate them moving in together. To mark the occasion we served wines that meant something to us as a couple.

We started with Champagne and nibblies: dates stuffed with walnuts, wrapped in prosciutto and baked. Then we had butternut squash soup (with a swirl of heavy cream and chopped fresh parsley) and Barbaresco, a 1999 Fontanabianca.

The first Barbaresco I ever tasted was a 1995 Fontanabianca, in 1997 at an Italian restaurant (long since closed) in Seattle’s University District. One of those summer nights when I fell in love with Kelley all over again and began my love affair with the Piedmontese. The owner of the restaurant (a rogue called Angelo–who sometimes appeared at table with a black eye or missing tooth) suggested a wine (because at the time we knew nothing of Italian wine), and decanted it into a cheerful ceramic jug to air it out. I wasn’t watching: I was holding Kelley’s hand and grinning foolishly. But then, oh, the smell! It cut through my hormonal daze and made me pay attention: sun on mineraly dirt, and rising, rising like the last moisture from parched mineralyt earth. One day I’m going to go to Italy and I swear I’ll be able to find that vineyard by scent alone: it will be a steep hillside with dusty soil and a sky like a blue bowl. I will want to plunge my hand into the dirt to the wrist and sniff it.

We’ve had all that late 90s vintages of Fontanabianca now, and they’re all wonderful. They all bring back the memory of that night.

After the soup we had spring lamb stew, with a magnificent Barolo, a 1998 Pio Cesare that we first drank on one of our wedding anniversaries. It was just as fine: old school structure, a deep garnet colour, and that nose…

For desert, it was chocolate cloud cake and a ’73 Armagnac. Sister to this one–but it tasted quite different: burlier and more…edged, shockingly distinct on first taste but then relaxing into complexity. I think I prefer it to the ’80; it’s much less like an urbane Cognac, and more like the coarse and energetic and bright Armagnacs I first fell in love with fifteen years ago. Anyway, here’s a picture of dessert (not the best pic ever–hey, you try drinking three wines and an Armagnac and take a beautifully composed photograph): 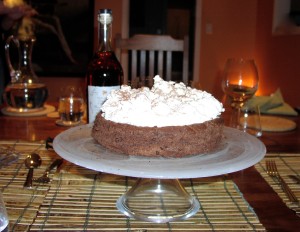 It was a long, lazy evening of wandering conversation. And we all went to bed smiling.

Posted on April 27, 2010 by Nicola Griffith in Uncategorized

7 thoughts on “Falling in love, again”