Yesterday, I got schooled by an expert sabreuse. I’m still blinking.

I’ve always loved the notion of fencing, but when I was fit I never had the opportunity to learn and since I’ve had the opportunity I’ve also had MS. So, eh, it’s one of those things I’d consigned to the Not in This Lifetime category. But I do occasionally opine online about my affinity for sword-and-pony fiction, and how one day I seriously wouldn’t mind being Sir Nicola.

And it turns out that one of our new friends, Angélique, is, as I say, an expert–she learnt sabre as a child, with a real sabre–actually a collection of them. She pointed out that sabre is a rider’s weapon. That is, it’s designed to be used from a seated position. So I could learn to use a sabre without relying on my legs.

I beamed. Angélique, bless her, lugged a huge collection of gear cross-country, to teach me safely.

First, there’s the chest protector. Then the plastron. Then the thick, padded jacket. (Both the latter made of ballistic material designed to prevent serious injury and, y’know, death.) Then the glove. (We didn’t bother with breeches or shoes.) 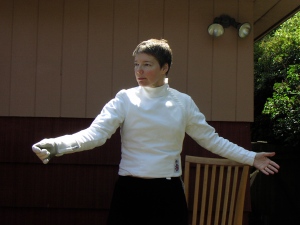 Angélique, being smart, wanted me to imagine some stuff before actually giving me a pointy thing. So now she’s explaining how one holds the sabre: pinching the hilt between thumb and index finger. (Yep, it’s sunny. Yep, it’s beginning to get warm in all that gear. Yep, that’s a bit of tape from the plastron dangling down from underneath my jacket.) 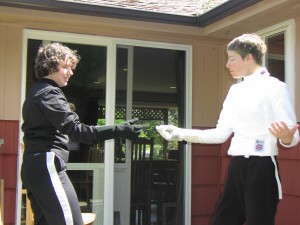 Then it was time to get really geared up: the mask. Those things are heavy. And hot. And you’re supposed to put them on using only one hand (because you have a sabre in the other). And that’s very heavy mesh. It really limits visibility. And it feels shockingly claustrophobic. But, wow, who cares–because now I get to hold the shiny sabre! 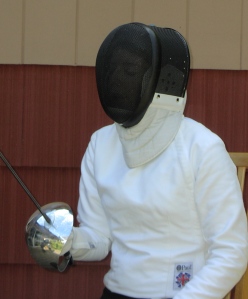 So, En garde! and Allez! 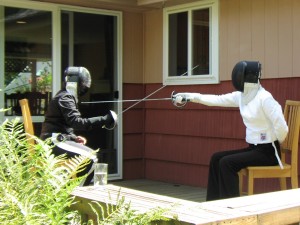 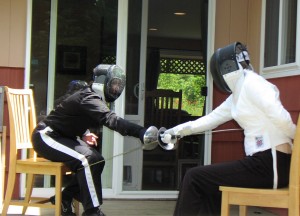 We did this for about an hour and a half. It was enormous fun. I’m hoping to do it again. This time I’ll figure out this right of way thing. And remember to riposte instantly.

My biggest problem was that I treated fencing like chi sao. In chi sao, you maintain constant contact, always feeling the intent of your opponent, feeling shifts in their centre of gravity, through their skin. I tried to do the same with the blade–but that’s absolutely the wrong way to approach sabre. When fencing it’s all about the disengage, the fake tell/feint, and then you can’t just swing and stab you have to take turns to attack, parry, riposte. It’s like chess or maybe poker (no pun intended) with swords. I couldn’t get the hang of the rhythm. But, oh, next time…

Posted on July 21, 2010 by Nicola Griffith in Uncategorized

19 thoughts on “In which I learn sabre”