Today’s my birthday. I should probably post something Deeply Meaningful but I find I’m not in the mood and because it’s my birthday I don’t have to do anything I don’t want to. So, ha, screw it. We’ll talk about spiders instead. (Note to arachnophobes: go no further.)

At the end of September, our garden turns into the Kingdom of the Spiders. They spin their webs any- and everywhere inconvenient: in front of doorways, between railings, across stairways. They drape them over trees, bushes, roses, the perbs.

These two are on the side deck where I keep the perbs. 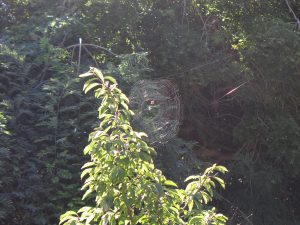 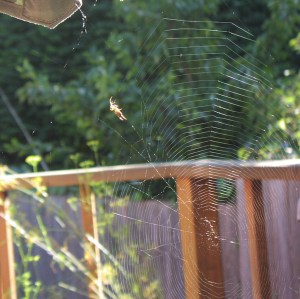 This one is on the back deck right outside the sliding door. 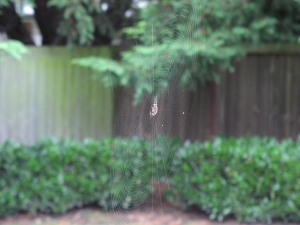 I would have taken more photos but the battery on the camera ran out, then the phone rang, then… Ah, you know how it goes. Life happens.

I wish I could capture how beautiful these gossamer webs are, though: glistening with dew, shimmering in the morning light. As it gets colder, they’ll start glittering with frost. And one morning they’ll all be gone. Some metaphor for life, there, if I could only be bothered to draw it.

Perhaps by the end of the day I’ll be feeling Old and Wise and motivated. But, eh, probably not. There’s a lot of partying to get done…

Posted on September 30, 2010 by Nicola Griffith in Uncategorized

17 thoughts on “The Kingdom of the Spiders”