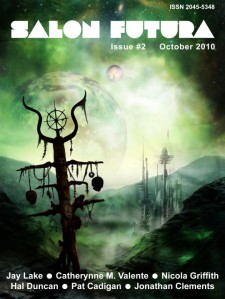 Up on Salon Futura #2 I’m interviewed, along with Hal Duncan and Cat Valente, by Cheryl Morgan, for a podcast about the trials, tribulations, and triumphs of writing LGBT/LGBTQIA (aka quiltbag) characters in fantastic literature. It’s an interesting conversation. Actually, I think it would be more true to say that I listened with interest while the others said smart things. My brain was in standby mode for much of it (the perils of 10-day jubilees: I did it on this day). I kept trying to wake up but just didn’t quite get to the surface. And when I did chip in, my audio connection often boiled with static, so, eh, I think my part in the podcast was minor.

My contribution to the conversation can be summed up in three parts:

I’m a lot more articulate here on my keyboard than I was with my headset. But, as I say, the others had interesting things to say. Definitely worth a listen.

Salon Futura, by the way, is a gorgeous-looking new magazine run by FoAN Cheryl Morgan and stuffed with interviews and articles. So why are you still here?

Posted on October 5, 2010 by Nicola Griffith in Uncategorized