A melancholy, rainy day here in Seattle. But briefly this afternoon the clouds thinned to gauze and the garden blazed. I took some photos. I suspect it’s the last time I’ll see this kind of colour until next year.

And so, farewell to breakfast and lunch on the deck with birds singing: 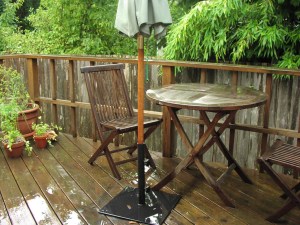 “I mock your optimistic sunbrella.”

Farewell to the hummingbirds trying (dim things) to sup nectar from the climbing roses. There’s just one left, clinging gamely to the vine: 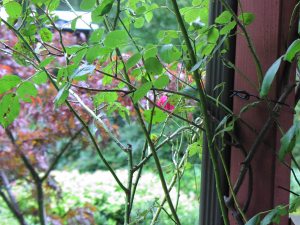 Farewell to the baroque web architecture. Just survival of the fattest:

“I’m the last of my kind–but they were tasty.”

Farewell to the day lilies. I had no idea they could last this long. But they’re looking a bit lost.

Farewell, maybe, to all this stuff–no idea what most of it is, but it seems to be shrugging off the weather, doing its own thing. Very Seattle.

Farewell to these, too, though I still don’t know what these are, either, though obviously they’re much, much tougher than they look.

“We jeer at your October miserable rain. We are pink. Hear us…say pink things.”

Farewell to the maple leaves, though the berries should be around for a while. And that fence post is built for electric-blue Stellars jays. 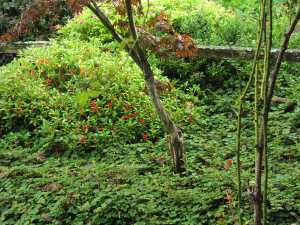 There won’t be much colour in the turning leaves this year, I don’t think, no flame red or burgundy or shimmering gold. But soon it’ll be cold enough to sit before the fire and look into those reds and yellows, and we’ll be sipping garnet-red claret, then there’ll be orange pumpkins and the viney deliciousness of Beaujolais Nouvea. So damn the rain, and full speed ahead for autumn!

Posted on October 10, 2010 by Nicola Griffith in Uncategorized