So here’s a shot of the garden outside my office window Sunday morning. (Taken through a screened and shut double-paned window therefore very blurred–my iThing camera really, really isn’t this bad. Think, ‘operator error’, that is, playing with my toy in the morning before I’ve even had a cup of tea–like a kid at Christmas. Imagine me beaming with delight over this muddy little picture. Or perhaps half-mad due to lack of caffeine. Or, y’know, both.) 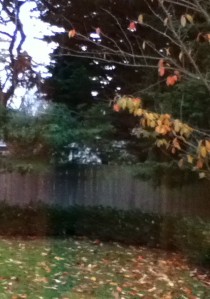 Autumn to winter wonderland in twenty-four hours. Whap. What’s so strange (to me; perhaps you worldly people have seen it a hundred times before) is seeing the snow on leaves. In my worldview, trees don’t have leaves and snow at the same time. Needles, yes, because of the whole coniferous thing. But broad, deciduous, sherbet-coloured leaves? It’s just not natural. (Here in Seattle, it’s the coldest it’s been in November for 20 years. So there: I’m not barking mad. No madder, at least, than any other stir-crazy novelist thundering towards the cliff end of her first draft.)

And, hey, no complaints about the craptastic photos. Just be grateful I’m not foisting on you video of snow falling. Which I took with my fantabulously awesome new iThing. I have several: minute after thrilling minute of snow falling. You have been warned…

Posted on November 23, 2010 by Nicola Griffith in Uncategorized

5 thoughts on “What a difference a day makes”