We got our new AV set up running at last. The nifty new TiVo Premiere that allows for streaming from Netflix, YouTube, and more. That lets us get season passes and so on while we’re at our desks. That means we can use real HDMI cables now instead of doing ridiculous split signal crap via… Ah, but I’ve detailed tech tales of woe before. So the hell with moaning, back to the fabulousness!

We get all the HD channels! And the picture is beautiful! And the sound! I am thrilled. (As an indicator of my delight, I’d insert a picture of kitten playing deliriously with a piece of string, if I could figure out a way to do that with dignity…) Instead, here are two pix of the TV in action: 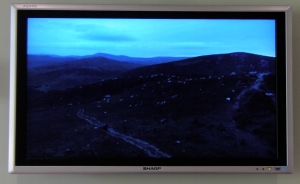 They’re bad photos but, trust me, the screen quality is exhilarating. It’s such a blast to be able to use the whole screen without catastrophic loss of quality.

Posted on April 8, 2011 by Nicola Griffith in Uncategorized