Yesterday was our wedding anniversary. Crapcam got a workout. First we were in the park. I spotted this fallen and naturally split tree trunk and thought: ha, now I know how some woman first came up with the idea for a canoe: 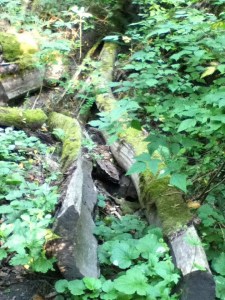 Later, we went out for dinner. Well, actually we went out for drinks, then somewhere else for dinner. A few hundred yards from home we turned west onto our street and I felt as though the universe had punched me over the heart. The sky was on fire over the sound and mountains. Stunning. We pulled over and I took two photos, about three seconds apart. I wish I’d had a better camera but, hey, at least crapcam was there: 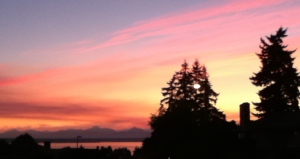 It was a truly lovely day: time in the park, time in the sun, time working on Hild, time–much much delicious time–with Kelley. Time is the most precious thing we have; I like to spend as much of it as I can with the best person in the world.

Our marriage is old enough to vote. It has no legal force anywhere in the world, but eighteen years ago we stood up before family and friends and promised ourselves to each other. And, you know what? That matters. It makes a difference. I’d like same-sex marriage to have some federal force, and I don’t doubt that one day that will happen. Meanwhile, our lives just get better and better.

Posted on September 5, 2011 by Nicola Griffith in Uncategorized