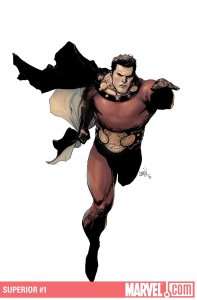 From Comic Book Resources news of a big film about a superhero with multiple sclerosis:

Award-winning comic-book writer Mark Millar is empowering people with MS with his envelope pushing latest character Superior, the first superhero ever to be diagnosed with MS. And he is sharing him with the National MS Society (www.nationalMSsociety.org) to help raise awareness for MS and the work of the Society.

The hugely popular comic Superior, which is part of the Millarworld line, follows the tale of a young boy living with multiple sclerosis who’s granted a magic wish. He asks to be transformed into his favourite big screen action hero and uses his new super-powers to right the real world’s wrongs. Whereas most superheroes fight criminals and stop bank robberies, this little boy uses his abilities to end the war in the Middle-East, feed the starving, rescue people from natural disasters and anything else the public wants. But have these incredible powers and worldwide adulation come at a price? This dark, magical tale has been described by critics as Big meets Superman, a unique take on the superhero mythos with a magical element that appeals to Harry Potter fans as much as the traditional superhero audience. The movie rights to this book were snapped up by Kick-Ass and X-Men director Matthew Vaughn with a view to turning this into a Hollywood blockbuster. (via @kelleyeskridge)

I wonder if Superior’s first mission will be visit his wrath upon those who fudge drug trial data? Or those who disseminate said data? Or those who pay neurologists kick-backs for prescribing the drugs so trialled? Or the the national organisations who have, upon occasion, made some poor judgement calls regarding their advertisers and their editorial direction. I would pay to see that story.

But I’ll probably pay to see this story, too. I’m intensely curious about how they’re going to portray a boy with MS. I wish Mark Millar and Matthew Vaughn the best of luck–and hope they’ll consult MS dissidents like me, not just the big organisations with a lot of money in the game.

Posted on October 5, 2011 by Nicola Griffith in Uncategorized

17 thoughts on “Superhero with MS”