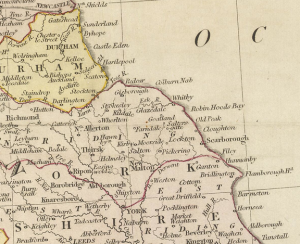 Thanks to a friend, this week I’ve spent some happy time with layered historical map data for Whitby. Part of the joy was zooming in and getting info (graphics, text) from different eras. One chunk of text, by one William Camden (late 16th century, guessing from the spelling and the headshot painting), was fascinating:

From thence the shore, endented and interlaced with rockes, bendeth in as farre as to the river Teise, and by a compasse that the said shore fetcheth there is made a bay about a mile broade, which of that outlaw Robert Hood so much talked about we call Robin Hoods Bay. For hee (as John Major the Scotishman writeth) flourished in the reigne of Richard the First, and the said Author setteth him out with this commendation that, hee was in deed an Arch-robber, but the gentellest theefe that ever was. Then Dunus Sinus, a creeke mentioned by Ptolomee, streightwaies by giving backe of the shore on both sides sheweth it selfe, neere unto which standeth Dunesley a little village, and hard by it Whitby, in the English Saxon tongue Streaney-heale , which Beda expoundeth to bee the Bay of a Watch-towre. Neither will I call that interpretation into question, although in our language it doth resemble Sinum Salutis , that is the Bay of health , so that I would say this very same was Salutaris Sinus , that is, The Bay of safety, but that the situation in the Geographer did perswade mee otherwise. Here are found certaine stones faschioned like serpents folded and wrapped round as in a wreathe, even the very pastimes of Nature disporting her selfe, who, as one saith, when shee is wearied as it were with serious workes, forgeth and shapeth some things by way of game and recreation. A man would thinke verily they had beene sometime serpents, which a coate or crust of stone had now covered all over. But people to credulous ascribe this to the Praiers of Saint Hilda, as if shee had thus transformed and changed them: who in our Primitive Church withstood to her powre the shoring and shaving of Priests and the celebration of Easter according to the order of Rome, when a Synod was helden touching these matters in the yeere of our Lord 664 in the Abbay which shee had built in this place, and whereof her selfe was first Governesse. Unto whose holinesse also they ascribe that those wild geese which in winter flie by flockes unto Pooles and Rivers that are not frozen over in the South partes, whiles they flie over certaine fields heere adjoyning, soudainely fall downe to the ground, to the exceeding great admiration of all men: a thing that I would not have related had I not heard it from very many persons of right good credit. But such as are not given to superstitious credulity attribute this unto a secret propriety of this ground, and to an hidden dissent betweene this soile and those geese, such as is between wolves and Squilla rootes. For provident Nature hath infused suchlike secret mutuall combinations and contrarieties, which the learned terme Sympathies and Antipathies, as all men acknowledge, for their preservation. Afterwards Edelfleda King Oswins daughter enriched this Abbay with most large revenewes, where also she solemnized her fathers funerall obsequies. But at length the Danes, robbing and spoiling wherever they came, utterly overthrew it, and although Sir Percie reedified it, being immediately upon the comming in of the Normans head-ruler of the same, yet now it scarce affordeth any footing [vestige] at all of the ancient dignity. Hard by upon a steepe hill, howbeit betweene two others higher than it, toward the sea, stood by report the Castle of Wada a Saxon Duke, who in that confused Anarchie of the Northumbers and massacre of Princes and Nobles, having combined with those that murdred King Ethered, gave battaile unto King Ardulph at Whally in Lancashire, but with so disasterous successe that after his owne powre was discomfited and put to flight, himselfe was faine to flie, and afterwards by a languishing sicknesse ended his life, and heere within the hill betweene two entire and solide stones above seven foote high lieth entombed: which stones because they stand eleven foote asunder, the people doubt not to affirme that hee was a mighty Giant.

And you know what those certaine stones faschioned like serpents folded and wrapped round as in a wreathe are, right? Two guesses, and the first doesn’t count:

So, yeah, looks as though I’m never, ever going to stop talking about ammonites, whether I’m writing historical fiction or science fiction.

By the way, in my novel, Whitby is known variously as Streanæshalch, Bay of the Beacon, and Mulstanton.

Posted on October 13, 2011 by Nicola Griffith in Uncategorized