I’ve had an interesting couple of days. Bumpy, in some respects. (Waiting–and everyone I know seems to be waiting for some important news right now–is not my forte.) But then two things happened that felt like a ray of sunshine slicing through the murk.

First, we planted some Siberian iris that came, in direct descent, from Joanna Russ. And then, literally two hours later, this gift arrived from New York: 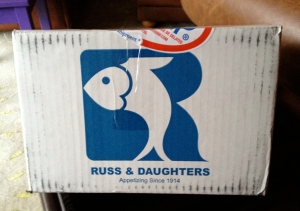 The box was full of caviar.

So I’ve been pigging out on luxury items, and dreaming of a summer bright with the kind of irises Joanna might have gazed upon while writing her classics. Which of course she had no idea would be classics while she was writing them. Or maybe she did. Which–frankly–makes me feel even more pleased with the world: we all do what we must do, and the world grants its grace and favour or, shrug, it doesn’t. Nothing much you can do to influence public opinion except do what you do, and do it well.

So I’m in a phelgmatic mood. And heading towards cheerfulness. Happy Saturday.

Posted on December 3, 2011 by Nicola Griffith in Uncategorized