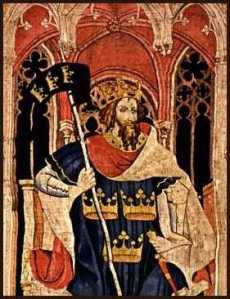 Yesterday I started rereading Gillian Bradshaw’s Arthurian trilogy. I’ve always loved Hawk of May. And I like Kingdom of Summer well enough. But I rarely continue to In Winter’s Shadow.

As I read and mentally ranged ahead to the next book I realised that this–preferring the first book in the sequence–is a pattern with me and the Matter of Britain (or at least the Arthurian cycle). I love T.H. White’s Once and Future King, yet I can’t remember the last time I managed to read past The Sword in the Stone. Then there’s Mary Stewart. I’ve lost count of the number of times I’ve immersed myself in The Crystal Cave, but I’ve read the next two books, The Hollow Hills and The Last Enchantment, less often, and the fourth, The Wicked Day, hardly at all.

I suspect it’s a combination. The Arthur story cycle inevitably begins with the story of boys (whether Arthur and Kay, Arthur and Merlin, or Arthur and Gawaine/Gwalchmai; girls don’t enter into it. It’s a tale of honour, glory, civilisation holding the line against lapping barbarianism, and swords, ponies, and brave banners. Wonderful outwardly-directed adventure with very little angst. But boys grow up, they notice girls, and suddenly we’re in the heads of these bright, beautiful, brave young women who are hopelessly bound, bent, and belittled by the constraints of their gender. There’s a lot of angst. Much less simple hack-the-heads-off-the-bad-guys and Might=Right=Light.

These are all things I had to bear in mind while writing Hild. I was determined not to fall into the gendered angst trap; my aim with this book is immersion, not claustrophobia. But when I began, I began to worry. In the early seventh century, women (by one estimate) spent 65% of their time on textiles: growing, harvesting, processing, weaving, sewing (and so on) flax and wool (and hemp and, sometimes, nettles). This is not the stuff of riveting twenty-first century fiction. Also, they really did die young, in their twenties generally (pregnancy is very, very hard on malnourished bodies). The easy way out is to do what most genre writers do: and sidestep the issue by giving their protagonists unrealistic/ahistorical traits and habits: they use the sword; they have sex without fear of pregnancy; they are perfectly healthy; their mate understands their need for independence. These writers use history as window dressing.

That isn’t my path. I want readers–including experts in the field–to read Hild, nod, and think, “Yes, that’s how it was.” So my challenge was to bring the seventh century alive without suffocating the reader in the harsher aspects of reality: pain, disease, discomfort, fear, uncertainty, work, early death having babies. And to find a way to make it work while still colouring inside historical lines.

I found a way. I used a combination of narrative technique, Hild’s extraordinary mind and body, and her peculiar and particular situation. I admit I did cheat in one respect: Hild’s health is almost superhuman. (This can be sort of explained by the fact that she’s astonishingly privileged: she gets all the food and comforts she needs. Besides, I thought I was allowed one free pass. And writing about illness is so tedious.)

But that was only for book one–traditionally the easy one in the sequence. I’m currently outlining book two and am going to have to pull some rabbits out of hats. How I love the smell of challenge in the morning!

While I’m doing this, you could go amuse yourselves with reading some of these books:

Gillian Bradshaw’s Arthur books are historical fantasy with supernatural elements:
Hawk of May (1980)
Kingdom of Summer (1981)
In Winter’s Shadow (1982)

T.H. White’s books are ahistorical, wickedly pointed, but not particularly fantastic:
The Sword in the Stone (1938)
The Queen of Air and Darkness (1939, originally titled The Witch in the Wood)
The Ill-Made Knight (1940)
The Candle in the Wind (1958)

Posted on January 12, 2012 by Nicola Griffith in Uncategorized