The Science Fiction and Fantasy Translation Awards are awarded annually for works of speculative fiction translated into English from other languages. There are two awards: one for long form (over 40,000 words) and one…well, I expect you can work that out.

They are a fabulous idea–encouraging availability of world sf–and they need your help. They are currently running an auction fundraiser, with many great prizes. Some examples:

Kelley is giving a signed copy of the Small Beer edition of Solitaire, the one with the fab new cover: 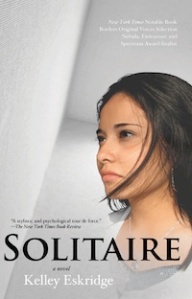 I’m offering a signed first edition of Ammonite, never even opened. (If you’d prefer it utterly uncracked, I won’t sign it.) There have been several editions and printings of this book: 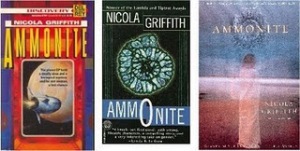 The one I’m offering is the orange paperback on the left with the jellybean spaceship. It’s the very first printing of the very first edition of my very first novel. I don’t know how many there are left in the world but I only have two on my shelf.

Please go make some mad bids on some good stuff and help a great cause. (Don’t forget it’s tax-deductible–and your employer may match the money you donate.)

Posted on January 25, 2012 by Nicola Griffith in Uncategorized