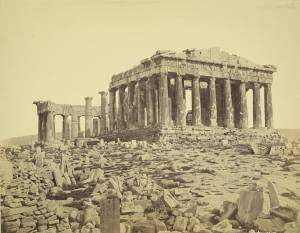 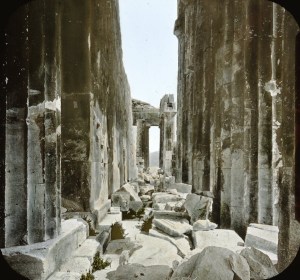 These two photos were taken a long time ago. But this is how the Acropolis looked when I walked there, when I sat on one of those bits of marble and smoked a cigarette looking out over Athens. Of course, when I was there, it was less clean: can tabs, cigarette butts, food wrappers… And perhaps it was slightly more ruinous. But it was magnificent. Even in the haze of morning-after-my-first-sex-with-a-woman it made an impression:

Greece was the first foreign country I visited. It marked many firsts. Kissing a girl. Knocking a man down (I was smoking outside a disco, sitting on a wall, he came outside and sat next to me; he wore a white silk catsuit, professed to love the music of “pin floynd”, and insisted that because he was joining the army tomorrow we had to kiss; I pushed him backwards off the wall). Smoking inside an historical monument (the Parthenon, and yes, it was amazing to sit on a broken column and look out over the city with my girl by my side and a fat bumble bee buzzing by my foot). From And Now We Are Going to Have a Party: Liner notes to a writer’s early life

Since then, the Greeks have partially restored the place. And now they want a return on their investment:

In a move bound to leave many Greeks and scholars aghast, Greece’s culture ministry said Tuesday it will open up some of the debt-stricken country’s most-cherished archaeological sites to advertising firms and other ventures.

The ministry says the move is a common-sense way of helping “facilitate” access to the country’s ancient Greek ruins, and money generated would fund the upkeep and monitoring of sites. The first site to be opened would be the Acropolis.
Archaeologists, however, have for decades slammed such an initiative as sacrilege. [Read the rest here.]

Posted on January 29, 2012 by Nicola Griffith in Uncategorized

4 thoughts on “Available for rent: the Acropolis”