I posted this over on Gemæcca earlier this week. I thought you might like to read it here. The maps and schematics are a mix of hand drawn sketches I made to figure things out while I was writing the book, and some Photoshop neatening. But I don’t claim to be any good at this…
Last week I read in the Guardian about the discovery of what could be indications of a very early Christian church and burial site beneath the current York Minster.
If the more excitable members of the team leading the excavation are right, this could be the wooden church built by Edwin, Hild’s uncle:

Potentially the most significant finds are two nondescript round holes, with groundwater bubbling up through the mud. They are post holes that could date from the time of the earliest Christian church on the site […]

Ian Milsted, of York Archaeological Trust, who is leading the excavation, downplays the significance of the post holes: the timber rotted away centuries ago, and they have found no dateable evidence, not a shard of Anglo-Saxon pottery. But his colleague Jim Williams cannot restrain his excitement: the pits are evidence for very large posts, far too big and using too valuable timber to hold up the roof of a pigsty or a hen house, just outside the walls of the Roman basilica. “I think they’ve got to be evidence for a significant structure – and from a period when any evidence is incredibly rare and precious.”

If Williams is right, this could be the place Hild was baptised by Paulinus in 627 CE. It also means the bones found in situ might belong to some of her relatives. To me, this is all so thrilling I can hardly stand it. I’d give a great deal to be there right now, to look at the pit, to touch those bones, to know, deep down, that Hild really did exist.

I wish, too, that someone would provide a map so I could see exactly where they found those post holes.
I, of course, have already imagined how everything looks. So here are my thoughts on how Anglo-Saxon York might have looked at the time of Hild’s baptism. (What follows in part speculation, part fact. There are enough links provided for you to do your own preliminary fossicking about on the way to learning enough to make up your own mind.)
In Roman times York was known as Eboracum, the major city of Northern Britain, legionary headquarters, with an inner, fortified military zone surrounded by a larger, semi-fortified colonia (civilian settlement). It sat in the fork of two rivers, the Ouse and the Foss, and at the nexus of significant roads north and south (which became known as Dere Street and Ermine Street, which in turn became the A59/A1 and A1079/A15/A10, respectively). It was important. It was large (the inner fort alone covered about 50 acres/21.5 ha). The military headquarter building (principia) was 70 meters wide.
The Romans built and rebuilt the walls and roads at various times. They built well. By Hild’s time, the walls of the inner fort were still standing, and the roads were in good repair. Edwin rebuilt one tower, now known as the Anglian Tower (marked in red) with stone that was a poor match for the original, made of oolitic limestone as opposed to the beautifully cut magnesian limestone of the original. 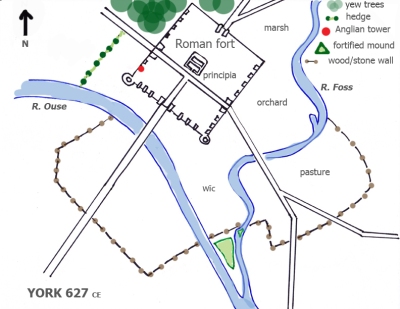 click to enlarge
The Roman colonia was also protected by walls, too, though only the southern half; the north, probably, was protected by marshlands created by the R. Foss spilling over on a regular basis. The Romans would have controlled this to the degree that suited them, but when they left, much of York would have been swamped.
When Edwin reclaimed York the climate was drying a bit so the ground was less swampy. He also redug and partially redrained. As a result he had to put in additional protection, notably in the form of a great thorn hedge to the west of the inner fort. He also strengthened the remains of the stone civilian walls with wood, and built wooden watch towers in the notch of the two rivers.
One thing I’m not sure about is where Edwin might have put his brand new wīc or trading area. It makes sense to me to put it between the rivers and under the eye of armed men on the walls in the wooden towers, so that’s what I’ve done. But I dithered: that bit might still have been too marshy; maybe it should go just east of the thorn hedge. In the end, though, I couldn’t resist putting it in a more open, sunny place.
Inside the fort, most of the buildings would already have been scavenged for building stone. I’m imagining the principia, the great headquarters building, still mostly standing. It would have had a great courtyard with a well, and a huge cross hall for state events. This hall I imagined as Edwin’s feast hall. Perhaps some of the south-east rooms could have been made habitable again and turned into women’s apartments. The rest was mostly cleared for gardens, used as storerooms, or turned into kitchens and bakehouses. One large area in the south east corner of the fort was reserved for exercise/military training. I think of it as the parade ground, the place where Edwin might have assembled his gesiths and baggage trains before marching out.
So where did Edwin build his church? That was easy: in the yard of the principia. There was a well, which Paulinus could easily have turned into a font. It would have been sheltered from the wind by the walls of the headquarters building, and it was in the exact centre of Edwin’s most powerful royal vill. We know that the succeeding church, built by Oswald, was made of stone, so the odds are good that if the finds mentioned in the Guardian last week are, in fact, a church, it was the original. I like the odds.
I see no reason for Paulinus not to have followed the usual W-E alignment of Christian churches. So here’s how it might have looked: 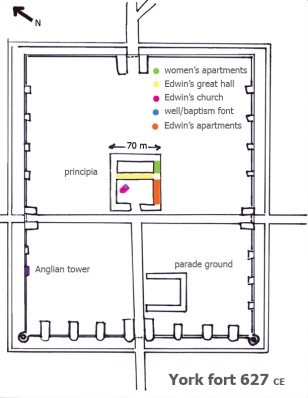 There’s a lot of circumstantial evidence to support this notion. If you superimpose the outline of the current York Minster on top of a plan of the Roman fort, this is what you get:

And given the traditions of the time–to build on what went before, that is, on the same alignment and overlapping the same footprint of the original or its successor–I’m satisfied that my version of events was at least possible.

Hild gets more real every day.

Posted on April 13, 2012 by Nicola Griffith in Uncategorized