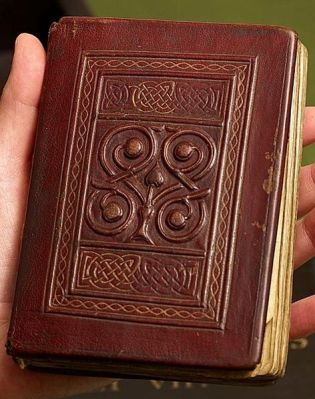 This is Cuthbert’s Gospel, the book that was buried at Lindisarne with St Cuthbert sometime after his death in 687. It is the earliest bound British–or even European–book to survive intact. It’s tiny, a pocket Gospel, written in Latin on vellum. It’s simple–no illumination, just elaborated initial letters, some with a bit of red–and beautiful.
Hild, who died just seven years before Cuthbert, might well have had a book like this. Sadly, I doubt hers would have been as fine. Her foundation at Whitby would have had a much more pioneering feel to it. The monks of Monkwearmouth/Jarrow, who are believed to have made Cuthbert’s Gospel, were a slightly later generation religious, more practiced scribes and book artisans.
But the text itself, the Gospel of John, would have been familiar.

Ever since I saw this image of the prologue, I’ve imagined Hild reading and rereading those first three lines:

This is the essence of Hild: the ability to name that which others either don’t recognise or are afraid to articulate. Language is her weapon of choice. Naming is her superpower–or one of them. John would have been her Gospel of choice.

The book is now owned by the British Library which has agreed to a co-custody arrangement with Durham University and Durham Cathedral. I hope to see it one day soon.

Posted on April 24, 2012 by Nicola Griffith in Uncategorized