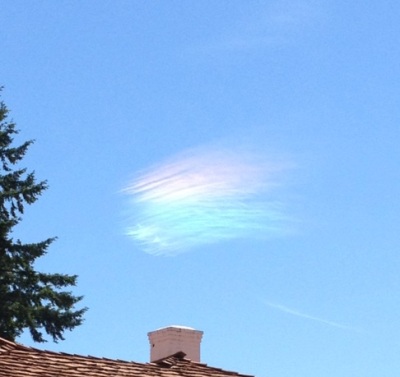 We saw this cloud right around noon on Wednesday. Those amazing colours lasted only a few minutes. It was basically a cloud-shaped rainbow. This photo doesn’t do it justice. (I was in the car.) ETA: apparently it was a fire rainbow.

The most interesting thing about it, though, was that when I first stepped out of the house, I didn’t notice it. Kelley did. “Wow,” she said. “Look at that cloud!” and pointed. It looked like…a cloud. Utterly unremarkable. Normal cloud colour and everything. “Can’t you see it?” she said. I said I could see the cloud, but it was, well, just a cloud. And as we were late, opened the car door, put my polarised sunglasses, and prepared to get in the car…and, Whap! the prismatic colours leapt out at me–not as bright as they are here (the cloud, and the colours, were moving fast; this was the tail-end of the light show, a pale shadow of its main glory) but clear. But Kelley wasn’t wearing sunglasses; she could see the colours anyway.

Eventually I could see them, too, even without the sunglasses. But I didn’t to begin with. And today I read this article, positing the existence of women who have super vision:

Living among us are people with four cones, who might experience a range of colors invisible to the rest. It’s possible these so-called tetrachromats see a hundred million colors, with each familiar hue fracturing into a hundred more subtle shades for which there are no names, no paint swatches. And because perceiving color is a personal experience, they would have no way of knowing they see far beyond what we consider the limits of human vision.

I sorta like the notion that my sweetie has superpowers…

Posted on June 23, 2012 by Nicola Griffith in Uncategorized

13 thoughts on “Some women can see a hundred million colours”