This will be the last links roundup, I think. Hild‘s been out six weeks and the pace of reviews and interviews is slowing. There are one or two to come but I’ll just link to them as and when they appear.
Previous roundups are here. At some point (when need some avoidance behaviour) I’ll create a roundup über page for those fanatics who wish to wallow in all things Hild.
REVIEWS
The Sunday Guardian
Left of Cool: Griffith’s historical novel is fun, fearless and feminist, Aishwarya Subramanian
“Perhaps Griffith’s greatest achievement here is in not giving Hild a modern mind. […] Hild is immersive and feminist, and believable. Whether this is historical fiction or fantasy (and Griffith suggests that perhaps there needn’t be a distinction between the two) it’s complex and intelligent.“
Val’s Random Comments
Hild: Nicola Griffith
(Neither random nor by someone called Val, but long and discursive and interesting.)
“Hild is a fascinating piece of literature. […]  It is also one of the most rewarding reads I’ve come across this year. I can’t wait for the continuation of Hild’s story. When that book is published it will no doubt jump right to the top of my to read list.”
The Next 50
Book Review: Hild, Nicola Griffith
“If you have any interest at all in historical fiction, the Middle Ages in Britain, the change from pagan religions to Christianity, the early church in Britain, the role of women in medieval times, etc., READ THIS BOOK. […] I understand from the afterword that there is a second book in the works.  I can hardly wait.  This one will be going to the nursing home with me (if I still have all my marbles) because it is a gorgeous read and I look forward to re-reading it repeatedly in the future.”
Journey of Faith
Stories
(Fascinating stuff, from the perspective of faith.)
“Like all great novels, Hild transcends the world it describes. […] Karen Armstrong writes in A Short History of Myth, that mythology (like good fiction) is fundamentally about our experience. ‘A myth was an event which, in some sense, had happened once, but which also happened all the time. Because of our strictly chronological view of history, we have no word for such an occurrence, but mythology is an art form that points beyond history to what is timeless in human existence.’ But ‘myth is not a story told for its own sake. It shows us how we should behave.’ […] Perhaps it’s time to let this image of being ‘the light of the world’ change me more completely.  Perhaps it’s time to see how far my light can shine.“

The AudioBookaneers
Release week: Nicola Griffith’s Hild
“Curious, I stayed up past midnight Monday night to jump aboard, and am well, well pleased with Hewitt’s narration, though far from finished as the audiobook runs well into a 24th hour. It’s a book I’ve been eagerly waiting all year.”

MISCELLANEOUS
Three writers at Ambling Along the Aqueduct put Hild on their end-of-year list:
Nisi Shawl:
“It is, simply, the best book I read this year—and there were others that came damn close. But Hild wields more beauty, strength, passion, wit, sex, fear, glory, grue, delicacy, and magnificence than any book has a right to. Griffith, as Eileen Gunn put it, “writes like a commando”—she takes you away to wherever she wants and you can’t refuse to go. I went. I’ll go back again willingly for any sequels she cares to manifest.”
Cheryl Morgan:
“The new Nicola Griffith novel, Hild, contains only homeopathic quantities of fantasy. And yet, much like a work of Magic Realism, it is set in a world where everyone believes in magic, and consequently for them magic does exist. That world is 7th Century Britain… Griffith does a magnificent job of creating this world, and because her central character is female it is a world we see very much through women’s eyes.”
Nancy Jane Moore:
“Nicola Griffith’s Hild is also one of my favorite books of the year. Like Fowler, Griffith does not confine herself to any one genre, though also like Fowler, I think her books will interest sf/f readers regardless of whether she is writing sf, thrillers, or – as with this one – historical fiction. This book pulled me into 7th Century Britain, making the dirt and menace of the times very real and yet allowing me to live fully in another world – one of the real pleasures I get out of fine sf/f. I can hardly wait for the sequel, because – in time-honored fashion – I want to know what happened next.”
Last week started with a bang. On Sunday there was, of course, this: 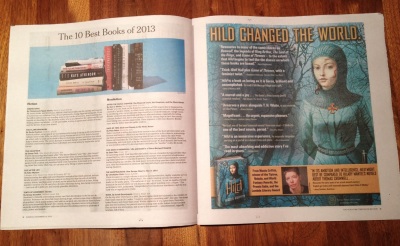 On Tuesday the audiobook came out.

And on Wednesday I posted two video clips:
And now Hild will take a bit of a rest. I know she’s going on a least one roadtrip…

Posted on December 22, 2013 by Nicola Griffith in Uncategorized