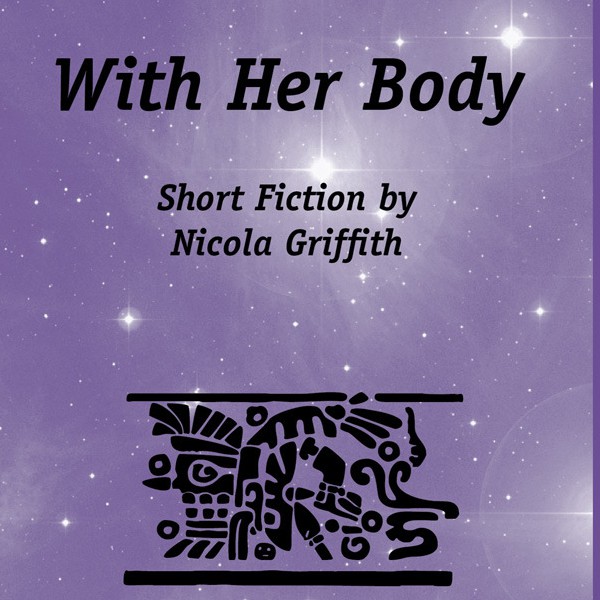 With Her Body presents three pieces of short fiction by the Nebula-, Lambda-, and Tiptree-award winning Nicola Griffith [“Touching Fire,” “Yaguara,” and “Song of Bullfrogs, Cry of Geese”]. Among the brightest stars of feminist sf, Griffith is known chiefly for her earthy yet luminous novels Ammonite, Slow River, and The Blue Place. Griffith’s particular attention to physical sensation and perception imbues the prose style of With Her Body with almost palpable heat.

Books to Watch Out For
Most stores that sell any science fiction at all should be glad to turn whatever cartwheels it takes to pick up the extremely popular Nicola (Ammonite, Slow River, The Blue Place, Stay) Griffith’s new short story collection, With Her Body. “Touching Fire,” “Song of Bullfrogs, Cry of Geese,” and “Yaguara” are all haunting, fiercely women-oriented tales of lesbians making their way in one world or another. As Duchamp says in her afterword, “SF that focuses on the male subject as representative of the human misses crucial aspects of the problem … By avoiding being caught up in resistance to the status quo, Griffith also avoids taking the status quo as the ground from which she must work and allows herself to tell alternative — new — stories that would otherwise be impossible to tell”.

glbtfantasy.com
Three stories from Nicola Griffith that focus on themes seen frequently in her fiction: the process of working through grief, connecting with nature—for better or worse—and the stories of women’s lives uninterrupted by the baggage of gender assumptions (usually accomplished by being blessedly devoid of male characters). All three tales are deeply embedded in the lush world of the senses, whether it’s the steamy embrace of a rain-washed jungle or the sweat-slicked arms of a lover.

My favorite was “Song of Bullfrogs, Cry of Geese,” a haunting post-apocalyptic story that invokes the often-nebulous, sometimes frightening, dividing line between civilization and the chaos of nature. It brought back vivid childhood memories of spending so many hours exploring the mysteries of the local swamp—thriving with life in every conceivable form—that I dreamed I slept in its waters at night.

Nicola Griffith stands at the forefront of modern speculative fiction. Her decision to use female characters exclusively brings a clarity of perspective to the age-old questions she contemplates in her work. Ammonite and Slow River remain two of the best sci-fi novels I’ve ever read. This collection of short stories expands those ideas even further, rooting them in the world we know best—our own bodies—and the body of the world around us. An outstanding addition to the genre.

Malinda Lo, AfterEllen.com
The genre of science fiction often brings to my mind spaceships, colonization of distant galaxies, and Star Trek. But there’s another kind of sci-fi, and that’s the kind written by authors such as Nicola Griffith. Griffith’s sci-fi is far more speculative than space-opera, and instead of spaceships and Captain Kirk we have the sticky heat of an Atlanta dyke bar, the loneliness of an abandoned condominium complex, and the mystery of a South American jungle.

There is still the sense of exploration of new universes, but those universes are often as not interior, and significantly, the heroine is always queer…

[W]hat is great about “Touching Fire”—and all of Griffith’s writing—is that the sexual orientation of the protagonists is never in question: they’re always queer. As series editor and feminist writer L. Timmel Duchamp notes in her accompanying critical essay, Griffith “creates an exclusively female sexual economy that operates regardless of the presence or absence of males in the narrative, such that only female characters exercise sexual agency or express sexual desire.” And desire is clearly and urgently expressed in all of the stories in this collection, although it is not always the romantic desire that Griffith draws out so expertly in “Touching Fire.”

“Song of Bullfrogs, Cry of Geese,” originally published in 1993, takes place at an undisclosed time, presumably in the future, when the human race is steadily dying due to a disease that weakens them too much to bear children. The protagonist of this story, a scientist named Molly whose lover, Helen, died of the disease, has secluded herself at their home out of grief and despair. Those who have read Griffith’s novel Stay (2002) will recognize the same deep desolation here, and like the novel, “Song of Bullfrogs” is a story about overcoming that grief—which is, at some level, an intense desire for someone who has been lost. Griffith’s writerly skills shine in this story, particularly when she describes the natural landscape that Molly inhabits.

“Yaguara,” originally published in slightly different form in 1994, is the longest story in the collection, and the most complex. It tells the story of photographer Jane Holford, who travels to South America to photograph the ruins of Kuchil Balum being excavated by Dr. Cleis Fernandez. This is no ordinary archeological excavation, however, with teams of graduate students and orderly marked grids for digging. Jane and Cleis are the only occupants of a lonely shack in the jungle, and their sole contact with the locals is the silent but formidable Ixbalum, a woman who clearly knows what the glyphs that Cleis is transcribing mean, but who refuses to share her knowledge.

“Yaguara,” the Spanish word for “jaguar,” is a kind of fairy tale—the kind that was told well before Disney came along, with a palpable sense of wildness and wonder. There is desire here, too, in the form of the sexual tension between Cleis and Jane, and also in the desire to know what goes on in the wet jungles that surround them. It is something primordial and awesome, and Griffith’s prose is as lush as the tropical scenery and as driven as the pull of the wild on Cleis…

With Her Body is an atypical collection of science fiction. It is intimate, sexy, and rich with good old-fashioned storytelling. That sounds like joy to me.

I have a total of 16 stories. Information listed includes date of first publication, length, and brief description including genre. Some people might be surprised that two of them are Warhammer stories.*

All, with the exception of “Libby Thomas” and “Princess Fat Grits,” have been reprinted, most many times, and may be available free online in both text and audio. I’ve linked three but there are others. Three more are collected in With Her Body. Quite a few are available in other languages. If you’re interested, there’s also a wonderful short video, “Sun on Dragonfly” based on my reading of “Touching Fire.” Enjoy.

• “We Have Met the Alien” (1990). Iron Women ed. Kit Fitzgerald, North Shields: Iron Press
1,500-word fantasy (science fiction? meditation?) about an adolescent discovering she is Other.

• “Down the Path of the Sun” (1990). Interzone
4,500-word post-apocalyptic science fiction about the nature of grief.

* Yes, they all feature queer women. Yes, even then. (I think I might have been the only woman in the anthologies. Certainly the only one writing under her own name.) They were commissioned by David Pringle who published them as is, though he did relay others’ comments to the effect that, “Judging by Nicola Griffith’s stories Warhammer is a matriarchy!” (It was a warning, I think: Write about boys! I did not listen.) There’s another Warhammer novella, “Blood and Earth,” that was never published—I did get paid, but the publishing programme ran into a problem—and a fourth, “Snakesteel,” that I outlined.

I had the best time writing those stories. So much so that in 2006 or 2007 I outlined a big sword-swangin’ fantasy novel based on my characters and plots. I got permission from Games Workshop to publish—if I de-Warhammered them; essentially filed off the serial numbers—but at the last minute started Hild instead. I still think about that novel sometimes. Swords, ponies, sex, angst, magic, war, betrayal, love…