Exactly two weeks today, on Thursday 10 April, Hild will be published in the UK as an ebook.

The hardback and paperback are due 15 weeks later, on Thursday 24 July. (Pre-order from your local independent book shop in the UK or Australia or India. Better buy-links closer to the date, I hope.)

I am thrilled at the prospect: Hild finally being available in my own country–in the country Hild herself helped make.

Here’s how it will look: the cover and the flap- and back-copy. 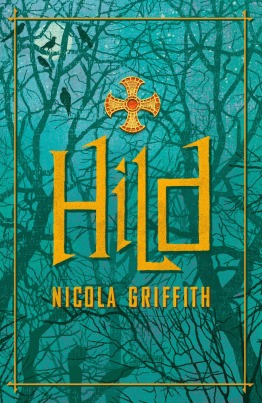 ‘You are a prophet and seer with the brightest mind in an age. Your blood is that of the man who should have been king … That’s what the king and his lords see. And they will kill you, one day’
Britain in the seventh century – and the world is changing. Small kingdoms are merging, frequently and violently. Edwin, King of Northumbria, plots his rise to overking of all the Angles. Ruthless and unforgiving, he is prepared to use every tool at his disposal: blood, bribery, belief. Into this brutal, vibrant court steps Hild – Edwin’s youngest niece.
With her glittering mind and powerful curiosity, Hild has a unique way of reading the world. By studying nature, observing human behavior and matching cause with effect, she has developed the ability to make startlingly accurate predictions. It is a gift that can seem uncanny, even supernatural, to those around her.
It is also a valuable weapon. Hild is indispensable to Edwin – unless she should ever lead him astray. The stakes are life and death: for Hild, for her family, for her loved ones, and for the increasing numbers who seek the protection of the strange girl who can see the future and lead men like a warrior.
In this vivid, utterly compelling novel, Nicola Griffith has brought the Early Middle Ages to life in an extraordinary act of alchemy. Drawn from the story of St Hilda of Whitby – one of the most fascinating and pivotal figures of the age – Hild transports the reader into a mesmerising, unforgettable world.
Praise for
Hild
‘You will never think of them as the Dark Ages again. Griffith’s command of the era is worn lightly and delivered as a deeply engaging plot. Her insight into human nature and eye for telling detail is as keen as that of the extraordinary Hild herself. The novel resonates to many of the same chords as Beowulf, the legends of King Arthur, Lord of the Rings, and Game of Thrones– to the extent that Hild begins to feel like the classic on which those books are based’
Neal Stephenson
‘Vivid, vital, and visceral, Hild’s history reads like a thriller’
Val McDermid
‘You could describe Hild as being like Game of Thrones without the dragons, but this is so much deeper than that, so much richer. A glorious, intensely passionate walk through an entirely real landscape, Hild leads us into the dark ages and makes them light, and tense, and edgy and deeply moving. The research is flawless, the characters fully alive’
Manda Scott
‘Nicola Griffith is an awe-inspiring visionary, and I am telling everyone to snatch this book up. Hild is not just one of the best historical novels I have ever read – I think it’s one of the best novels, period’
Dorothy Allison
‘Dazzling … Griffith’s lyrical prose emphasizes the savagery of the political landscape, in which religion, sex, and superstition are wielded mercilessly for personal gain’
Rachel Abramowitz, Paris Review Daily
‘In its ambition and intelligence, Hild might best be compared to Hilary Mantel’s novels about Thomas Cromwell’
Jenny Davidson, Bookforum

Posted on March 27, 2014 by Nicola Griffith in Uncategorized