If you’re in the Seattle area on Thursday night, February 19, come to Third Place Books (Lake Forest Park), and join me as I admire Kelley in conversation with author and playwright Robert Levy about his first novel The Glittering World.

It’ll be fun! Robert is smart and charming, and his book has already garnered praise from Kelly Link, Elizabeth Hand, Christopher Barzak, and many more.

What’s the book about? I’m so glad you asked: 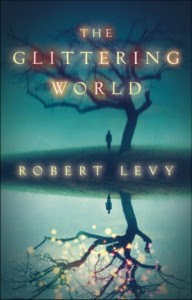 When Michael “Blue” Whitley — a former party boy turned up-and-coming Brooklyn chef — returns with three friends to the remote Canadian commune of his birth, he discovers that his entire life has been a carefully orchestrated lie. He is in fact someone else altogether, a replacement for a local child who disappeared twenty-five years earlier. He is something not quite human.

Only now it’s Blue’s turn to vanish, leaving his friends to unravel the mystery of his abduction. Soon, psychology and skepticism collide with old-world folklore and superstition, revealing the secret history of the commune as well as that of an ancient race of beings that inhabits the hidden corners of the land.

Set among the artisans, burnouts, and New Age mystics of rural Cape Breton, The Glittering World is a dark and modern fairy tale, a novel of self-identity and supernatural suspense.

New Yorkers can help Robert celebrate the launch of the book Tuesday, Feb 10 at the release party at BookCourt in Brooklyn. Robert also has bookstore appearances in Los Angeles, San Francisco, and Westfield NJ, as well as an appearance at Seattle’s Mythic Worlds convention.

Kelley is very good at this, and Robert—a forensic psychologist in real life—has some interesting things to say. Join us.

Posted on February 12, 2015 by Nicola Griffith in Uncategorized