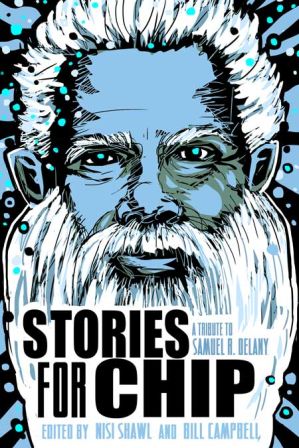 For $250 I will name a character after you* in one of the next fictions I publish. If you’re patient, this could be the second Hild novel, Menewood. If you’re in a hurry, and if I’m struck with a cool idea, it could be short fiction. This is the last time I’ll be offering a tuckerization for Menewood.

The money will go towards Stories for Chip, a literary tribute to Samuel R. Delany. I seem to have missed the call for submissions for the book, so this is my way of contributing. Chip was one of my teachers. I’ve written about his teaching before. (See, for example, “Character density in fiction.”) Contributors to this fundraiser include Junot Díaz, Andrea Hairston, Jonathan Lethem, Ellen Kushner, Hiromi Goto, Nisi Shawl and many more. It’s a fine list!

If you don’t want to pay $250, which is after all a serious chunk of change, there are plenty of other ways to support the project, starting at $1. Go contribute to this Thank You to Samuel R. Delany, groundbreaker, trailblazer, and kind man.

ETA: I’ve realised, a bit tardily (sorry!) that it’s already sold. But go contribute to something else!

* Or the person of your choice—who has explicitly given their permission, of course. We could chat about it beforehand, see where the name fits best (the seventh-century is tricky that way). You might find you want to be Hild’s horse, or the ship she spends time on, rather than some spear carrier who gets offed early in the narrative. Or, if we can figure out a seriously cool way to integrate your name, you might end up being a major character. It’s happened before. This is particularly possible if you take the short fiction option, where perhaps I’ll name a nifty process or theory after you. Pay your money, take your choice.

Posted on April 21, 2015 by Nicola Griffith in Uncategorized