Data suggest that the step from literary prize shortlist to winner might be an important inflection point in the operation of unconscious bias against women in the publishing ecosystem.

My recent focus on literary prize diversity has been aimed squarely at gender, both that of a book’s author and its main characters (those characters through whose perspective the narrative is funnelled; point-of-view characters).1 Due to the valiant efforts of the Literary Prize Data group, we now have data for the Man Booker Prize and the Edgar Allen Poe Award for Best Novel going back to 2000.

For the Man Booker we looked at longlist, shortlist, and winners. The Edgar does not publish longlists, so we could quantify only the shortlist and winners.2 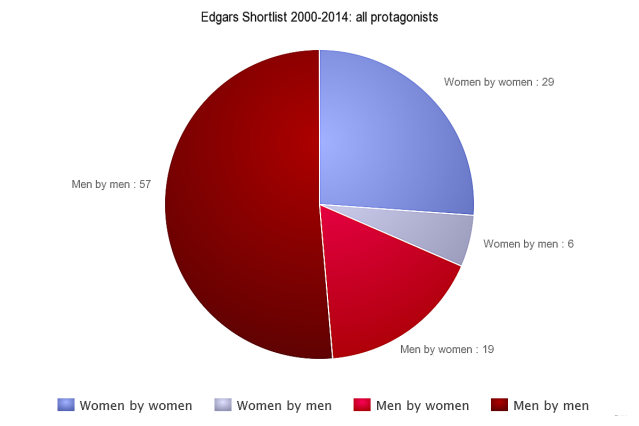 Women who write novels that are shortlisted for the Edgar write more about women than about men. Some men write about women, too (though they write about themselves nearly 10 times as often). Of the shortlisted novels, women make up 35 of the 111 point-of-view characters, or about 31.5%

Now look at what happens when the 90 shortlisted novels are whittled to 15 winners. 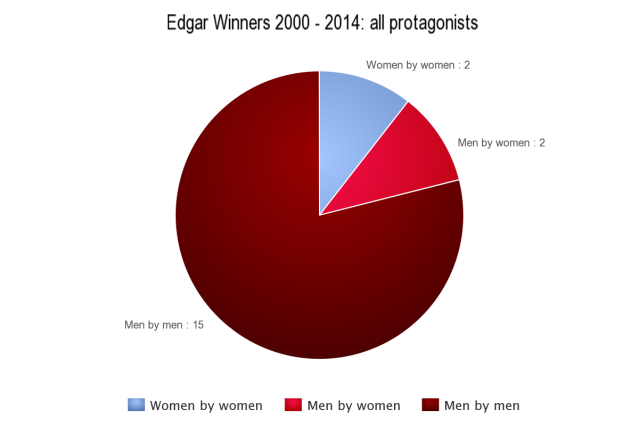 The overall proportion of women writers falls and those remaining write as often about men as about women. No men write about women. Of the 19 point-of-view characters, only 2 are women. In other words, the leap in prestige from Edgar shortlist to Edgar winner is mirrored by a drop in the number of female perspectives–women’s voices–from about 31.5% to 10.5%. 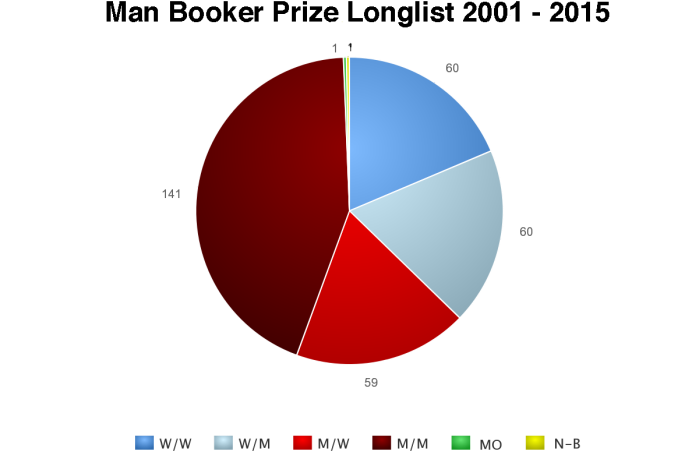 Then the longlist is shortened from 13 books to 65

But, oh, look what happens when the jury has to come up with the One Book to Rule Them All:

Women writing about men increases. No men write about women. And the number of women writing about women drops. In other words, the enormous leap in prestige, from being able to label your book Man Booker Shortlisted to Winner of the Man Booker Prize, is mirrored by a corresponding plummet in the proportion of in women’s perspectives from 38.5% to 16.66%.

1 This can be subjective, which is why we’re building a searchable database. When it’s up, we will welcome input and corrections.
2 We’ve changed the way we count: instead of “About women,” “about men” and “about both” we’re now totting up the total number of POV characters. So if the book under discussion is a linked collection of stories written by a woman with, say, 4 stories written from the POV of women and 7 from those of men, we count 11 protagonists in all, and assign 4 to “Women by women” and 7 to “Men by women.” (These will probably be relabelled “Female by female” and “Male by male” for the simple reason that the notation F/M is less error-prone than, say, W/M. Also, “Female” and “Male” cover both adults and children.) In addition, you’ll see that the two sets of charts are marginally different. I’ll standardise it at some point soon.
3 The Edgar calls their shortlisted novels Nominees.
4 The yellow and green segments are, respectively, Non-binary and Other. The latter includes animals, aliens, and other non-human protagonists. Note that for the longlist we begin in 2001 when the longlists were first published.
5 The longlist is currently 13 books, the shortlist 6. This has not always been the case.
6 This drop is not as shocking as my initial (wrong) assessment. But it’s still sharp. 9/1/2015

Posted on August 31, 2015 by Nicola Griffith in Uncategorized