This morning I found out from a friend that my first US editor, Ellen Key Harris-Braun, has died. I will miss her. Ellen was the first book publishing professional I worked with in this country; her generosity, willingness to colour outside the lines, and overall kind smarts helped form my expectations of the US science fiction publishing community.

Ellen bought Ammonite for Del Rey in 1991. Del Rey did not have the reputation as a liberal or experimental press at that time so I was a bit surprised at the offer: both the fact that Del Rey wanted this sex-romp-on-girlie-planet, or radical-reexamination-of-gender, or biological-What-If (all terms used about the book) and the fact that the advance was a bit more than usual for a first-time effort.

Then, as now, the success of first novels from genre presses live or die on the buzz, internal and external, generated before publication. Without Ellen, Ammonite, like so many other deserving books, would have withered on the vine.

I’d been working as a critic/reviewer for Southern Voice, the Atlanta queer newspaper, and the books that got media attention were hardcovers with beautiful covers that came with blurbs from other writers, a glowing letter of praise from its editor, and announced plans for advertising, author appearances, and interviews. So I asked Ellen what I could expect. And she said, Well, er, nothing. It would be a mass-market edition, with tiny type on nasty paper with a generic sfnal cover. There would be no publicist (no publicity), no appearances, nothing. Del Rey were operating on the throw-spaghetti at the wall and see what sticks model as so many imprints were at the time. They made calculations about the general hunger of the genre readership and just pumped out stuff and hoped the profits averaged out.

But this was my first novel and I wasn’t in the mood to bow my head to How Things Are Done, so I said to Ellen: if I come up with a plan, will you help? She said yes.

So Kelley and I went out for dinner, drank an inordinate amount of wine, and came up with some kick-arse ideas. First and foremost: a marketing blurb. I can’t remember if it was me or Kelley who came up with the actual phrase but Change or die… became the organising principle of our joint effort. I asked some writers I admire—who didn’t know me from Eve—like Ursula Le Guin and Vonda McIntyre if they would read the manuscript with a view to a blurb. When they said yes, I asked Ellen to photocopy and mail it to them. (It’s amazing to think that this was all happening before you could just send a file attached to email. Before most people had email, actually.) Then I got on the phone with two of my Clarion instructors, Tim Powers and Stan Robinson, and asked them if they were willing, too. (I didn’t have a number for Chip Delany, and never heard back from Kate Wilhelm and Damon Knight.) Once again, Ellen stayed late at work using company resources to make unauthorised copies and slipping them into the mail pile.

Very generous blurbs came back pretty fast. Then I set out to create an official-looking publicity sheet. This was before Photoshop: I cut and pasted the Del Rey logo onto a blank page and got Kelley to photocopy it a few times using the corporate resources of her employer until we had what looked like letterhead. Then I wrote a spiffy marketing blurb following what I’d learnt from two years reading this stuff for others’ books as a reviewer. Then I put together a list of feminist bookstores and specialty SFF bookstores and sent it, and a zillion copies of the fake publicity sheet to Ellen.

Del Rey would not be creating ARCs, bound proofs, or even photocopied manuscripts. There was no way Ellen could illicitly photocopy, bind, and mail the whole novel to dozens of book shops so between us we decided on the 20 most important, and chose the first four chapters. Ellen stayed after work for a few days, photocopying and mailing, and into each packet she put the fake publicity sheet plus a personal letter.

Meanwhile, we put our heads together to come up with a cover concept. Bruce Jensen came up with a lovely sketch that showed Grenchstom’s Planet, GP, or Jeep, with cloud cover looking like an ammonite (at least I think that’s how it looked; it was 25 years ago, and I don’t have a copy to refer to). Ellen showed it around internally and most people at Del Rey approved it. I was excited: this going to be a good-looking book! And then one day the president of Ballantine, Linda Grey, walked through the Del Rey offices, caught sight of the sketch, and said, “What the hell is that?” Ellen started to explain but Linda Grey gave her a look and said, “Del Rey’s an SF imprint; put a spaceship on the cover.” So that’s what happened. Ammonite, my precious first novel about self- and other-worldly exploration acquired a lurid orange and yellow illustration, complete with jelly-bean spaceship (which I admit I actually kind of liked but that seriously did not represent the book at all). We managed to get a sort-of ammonite shape overlaid on the planet but that’s about it. 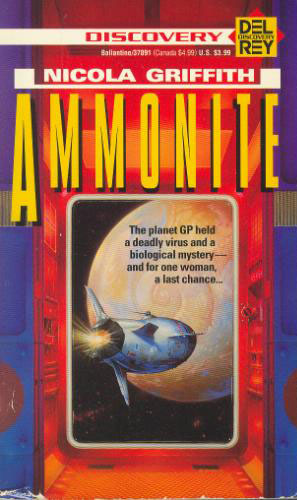 Meanwhile, the simultaneous publication of Ammonite in the UK (acquired by Malcolm Edwards before Del Rey and with much more support behind it) steamed ahead. The UK version had a much better cover, based largely on a sketch I’d drawn; I was very happy with it. But for a while none of us would know anything. Ellen acquired other novels. I wrote Slow River. And we waited.

I can’t remember when I first knew things were beginning to go really well. Perhaps it was the excited phone call from Ellen telling me I was about to have a brilliant review in The New York Times Book Review (I have no data for this but suspect it might have been the first mass-market genre novel to get glowing praise from the NYTBR), and the Los Angeles Times and the Washington Post Book World. Maybe it was the notification that Ammonite was short listed for a Lambda Literary Award even before it was officially published (and went on to win; and I finally met Linda Grey who referred to me as “our award winner”). But it was clear to me that thanks to the hard work, smarts, and generosity of Ellen Key Harris-Braun I was on my way. I don’t know of any other editor who would have helped me in this way, or who made such a difference in my career. Ellen was the first of many—and I mean dozens—in publishing who have helped me. But she set the tone for me; she was the one who showed me how important it is to help each other. I will always be grateful.

Thank you, Ellen. I will miss you.

Posted on October 29, 2016 by Nicola Griffith in Uncategorized