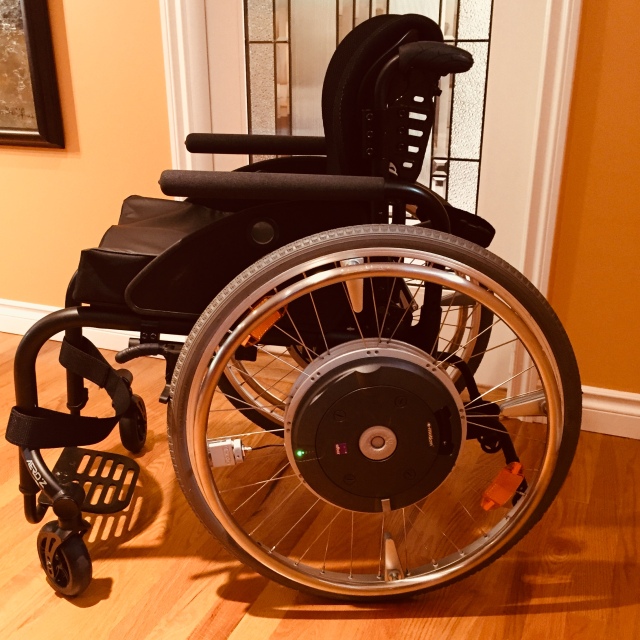 Image description: Unoccupied black, lightweight manual wheelchair with power-assist wheels, tubular armrests, and a crutch holster at the back, parked on a hardwood floor in front of an art deco-style glass pocket door.

Until recently I have used crutches outside the house, whether in or out of town, but it’s been getting harder and harder to get around. For my last Guest of Honour gig the convention committee rented me a power chair. It made moving from one event or venue to another very much easier but power chairs are so big that they create distance between the user and other people; it’s difficult to be part of a group. Also, the lack of effort made it clear that prolonged use might tempt me to abandon exercise altogether.

So when it came time to get my own wheelchair, I opted for a manual chair with power assist: the wheelchair version of an electric bike. I chose a rigid frame TiLite Aero Z with E-motion M15 power-assist. The armrests are lightweight and removable; there’s a holster on the back to carry my crutches. It’s ultra lightweight, except for the lithium-ion batteries that power each wheel. (I have a set of unpowered wheels for emergencies, for example if a huge earthquake hits and I can’t recharge for a couple of weeks.) Those batteries mean each wheel weighs about 25 lbs, more than twice as much as the rest of the chair. It’s small—it’s made-to-measure so the seat is only 15″ wide—but it’s too tall to stow upright in the back of the car. So when we travel locally we have to take off the wheels and load the components separately. And I do mean we; this is not something I can do on my own. Apart from lacking the leg strength to lift anything, I can’t currently drive. I’m gradually relearning, with hand controls (and, oh, that tale deserves its own post), and when I have my licence I plan to take out one of the passenger seats on our car and replace it with a lift to hoist the undisassembled chair inside. Then I’ll be independently mobile for the first time in at least 10 years. I’ve almost forgotten what that’s like…

Getting used to the chair is a process. We made our first out-of-town trip with the wheelchair just a couple of weeks ago when we went to Orcas Island for a few days’ break. We drove an hour north to Anacortes and took the ferry across to the San Juans.

The Washington State ferry system is an intricate and beautifully oiled mechanism. Watching the crew work out how to load all those cars, trucks, people, goods bicycles, freight, motorcycles and other assorted items so that each can get off at its intended destination is like watching a Rubik’s Cube savant in action. It’s fascinating. (One day I suspect Kelley or I will write about it for page or screen.) With the wheelchair, what we needed on the ferry was to park close to the passenger elevator but with room at the rear of the car to get out the chair components, and room at the side to assemble them—all out of others’ path so we don’t gum up the works. The ferry workers accommodated us perfectly; clearly they’ve done it a million times before. I did find myself wondering, though, whether they could accommodate four or more wheelchairs at once. Given our ageing population, I imagine I’ll find out sooner rather than later.

So, for now at least, the ferry works. Next test: flying to and getting around in San Diego.

The central difficulty here is those li-ion batteries. It’s illegal to put batteries that size in the unpressurised hold; they’re liable to explode into flame. So I have to take the batteries with me into the cabin, but that disables the power-assist. And I can’t use the chair on those steep jet bridge, especially with a carry-on bag, without the power assist. So I have to wheel down the jet bridge to the door of the plane, remove batteries, safe them (fit silicon caps to the contacts), and safe the interior hub contacts (with a plastic disc to cover exposed contacts), give the chair to airline loaders to put in the hold, get my crutches, stand up, remove the arm rests and tape them together (it’s hard to stand up without them), and somehow get on the plane carrying everything. All while other passengers loaded down with babies and buggies and diaper bags are piling up behind waiting to get on. And then do it all again in reverse when we landed.

We were not going to be in San Diego long; parking for less than 48 hours would work out cheaper than shuttles from our house to the airport. So we drove ourselves to SeaTac. Getting about in the airport in my own chair was easy and so very much more congenial than being wheeled about in an ill-fitting uncomfortable chair by a porter who treats me like a sack of potatoes.

We flew on Alaska. We explained at every step of the way (on the phone at booking, at check-in, and at the gate, and to the cabin attendants before disembarking), on each flight, that we would need at least five minutes lead time at the end of the jet bridge, right by the plane, in order to not hold up boarding. Alaska did their best, and everyone was very friendly and pleasant, but they couldn’t seem to quite grasp what we needed. In the end, on both outbound and inbound legs, we felt intense pressure to perform fast. We fumbled a bit in Seattle on the way out (hey, it was our first time), were a bit quicker when we landed in San Diego, maintained our composure when embarking on the return flight, and had became quick and efficient by the time we disembarked in Seattle. On both flights I fretted a bit: I’d heard so many horror stories of the damage wreaked on chairs in the hold. But each time the chair was just fine.

In San Diego we took a wheelchair-accessible Super Shuttle to and from the airport and hotel. This worked out very well and I can recommend them.

We stayed at the Westin in the Gaslamp Quarter: every inch we visited was accessible. It was like living in a dream of utopia; there were no barriers at all. If all the world were like that I think many disabled people would live longer, happier, richer (in every sense of the word) lives.

So, travelling with a wheelchair on the West Coast, visiting the rich touristy areas of an affluent liberal city, was unexpectedly good. I’ve no idea how people do it when travelling on their own—though I expect to find out that, too, one day—but given a choice I will use my own wheelchair from now on.

However, I am not so sanguine about our upcoming travel to the UK. For one thing, the sheer distances involved at Heathrow gives me pause. I think it’s miles, for example, between British Airways’ lounge and the gate they use for Seattle. For another, I’ll fret for nine hours about the death and destruction of my chair on the trip out. But I have to take my chair so I’ll fret whether or not we load the chair at check-in or at the plane. Once in the UK, intra-city transit will be easy: all big cities have many wheelchair cabs. The big problem, though, will be intercity travel. I don’t care what any rail employee tells me: British trains and train stations are not reliably accessible. Toilets don’t work, elevators don’t work, you have to get porters to find and deploy ramps; the whole system is a mess. Most car services that will drive you from, say, Heathrow to Leeds can’t accommodate a wheelchair unless it folds. And wheelchair accessible intercity transport is wickedly, iniquitously expensive. So I think we’ll be trying to find a service with an SUV/people mover big enough for disassembled chair plus suitcases as luggage. It will be pricey. But that’s my lesson: it costs much more to be a cripple than a healthy traveller.

Lessons for next time? Get the wheelchair insured! The damn thing cost more than our car. We’ll be screwed if it gets broken, but at least if we’re insured we can rent something while we figure it all out. Also, we need some kind of custom bag to organise all the stuff we need for the safeing and then to hold the batteries and arm rests securely on the plane. And rather than a carry-on it would be easier to have a detachable bag or pannier for the chair, preferably something that fits underneath the seat. If anyone has suggestions, I’m listening…

Posted on October 9, 2017 by Nicola Griffith in Uncategorized

12 thoughts on “Travelling with a wheelchair”