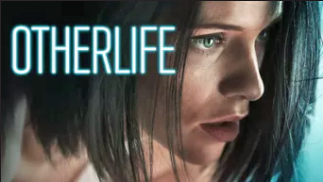 No matter where on earth you live, if you have access to Netflix you can now watch OtherLife, the film Kelley wrote, based on her novel Solitaire. The film is not only smart and emotionally true, it has a fascinating science fictional premise: if you can live a whole other life in the blink of an eye, and that other life feels indistinguishable from reality, how will you resist its allure? It’s lusciously filmed, with rich sound, gorgeous cityscapes and stunning outdoors sequences—rock climbing, snowboarding, skydiving, scuba diving. There’s also a harrowing sequence involving virtual solitary confinement—because anything people can invent they can abuse.

Essentially, though, OtherLife is beautiful: the human heart will win, real life will find a way. Go watch it. And then chortle, as I did, to see Kelley’s name not once but twice in the end credits. This film would not exist if not for Kelley and her amazing writing: first the novel, then the screenplay. Yes, it takes a village to make a movie—it’s far more of a team effort than a novel—the origins lie with Kelley. Kelley’s heart, Kelley’s mind, Kelley’s hard work.

I am very proud.

But don’t take my word for it. Go read Kelley’s post: 10 reasons to watch OtherLife.

Posted on October 16, 2017 by Nicola Griffith in Uncategorized