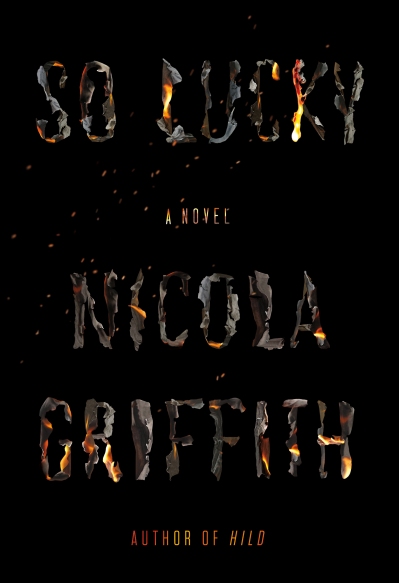 It came for me in November, that loveliest of months in Atlanta: blue sky stinging with lemon sun, and squirrels screaming at each other over the pecans because they weren’t fooled; they knew winter was coming. While Rose stood by her Subaru, irresolute, a large red-brown dogwood leaf—the same color as her hair—fell on its roof. She hated the mess of leaf fall, had threatened over the years to “cut that damned tree down.” Too late now.

After fourteen years of course it wasn’t all right, but, “Yes,” I said, because she would leave anyway.

The shadows under her eyes, the tiny tight lines by her mouth, nearly broke my heart. I hoped the lover whose name I knew perfectly well but refused to use would know what to do when those lines crinkled down like concertinas, as they were doing now.

“You should get going,” I said, before she could cry. “Traffic.”

She shook her head, slow and baffled: How did we get to this?

I turned away. And tripped. A slippery leaf, I thought, if I thought anything at all. A twig. Or that uneven bit of concrete we really should fix. But it wasn’t we anymore. It was just me.

Aiyana sat, as she always did, with her feet tucked under her and her close-cropped head dark against the far end of the sofa. I sat catty-corner in the armchair. The physical distance between us was a habit developed four years ago when, one summer evening in a bar after a softball game, sexual awareness unfurled between us. We never spoke of it but we knew that to come within the orbit of each other’s skin-scent and cellular hum could end only one way: falling helplessly, spectacularly into the other’s gravity well, momentarily brilliant like all falling stars, but doomed, because I loved Rose. And this friendship was too precious to burn.

The day had been warm enough for the end of summer, but the sun still set at November times. At twilight I opened the windows and cool air began to move through the house. The dark was not close and scented with humidity, not sappy with bright greens and hot pinks, but spare and smelling as brittle as the straw-colored winter lawn.

Aiyana turned her glass of Pinot, playing with the refraction of the floor lamp’s low light. “So. She really left.”

Her eyes were velvety but she said nothing because she was leaving, too. Two days before Rose asked for a divorce, Aiyana won funding for postdoc research at the University of Auckland’s Douglas Human Brain Bank.

“You’ve booked your flight?” She closed her eyes slowly, the way she said yes when not trusting herself to speak.

“When do you leave?”

Two and a half weeks. No Rose, no Aiyana. “I need more wine.”

In the kitchen I reached for the second bottle of Pinot already on the counter but then thought, Fuck it, and opened the wine fridge for the Barolo. My hand tingled and I shook it. Static maybe.

When I brought through the wine with fresh glasses she raised her eyebrows.

“If not now, then when?” I had been saving it for a fifteenth anniversary that would never come. I knelt by the coffee table. The cork made a satisfying thock, like the sound of summer tennis. I poured; it smelled of sun-baked dirt. I handed her a glass.

Perhaps because Rose was gone, or Aiyana was leaving, too, which made it safe, or maybe it was the smell of the wine or just that we wanted it that way, our fingertips touched and my belly dropped, and now the music seemed to deepen and the air thicken to cream. Her nostrils flared. We were caught.

Her feet were the color of polished maple, perfect, not like mine, not hard from years of karate. They needed to be touched. I needed to touch them. She sat still, wineglass in her hand, while I bent and brushed the side of one foot with one cheek, then the other. Under the soft, soft skin, tendon and bone flexed like steel hawsers as her toes curled and uncurled. I stroked the foot. I wanted to kiss it.

Her eyes were almost wholly black, fringed with dark-brown pleats. I kept stroking. She closed them slowly. I took the wineglass from her hand and put it on the table.

Our breath was fast, harsh, mutual. My cheek where it had touched her felt more alive than the rest of me and all I could think was how it would feel to lay my whole length against hers. So I did.

Josh next door had forgotten to turn off his porch light again and through my bedroom window a slice of light curved over Aiyana’s forehead, cheek, and chin. A face familiar from sweaty afternoons playing softball, drinking beer afterward, and sometimes coffee at the Flying Biscuit. But strange here. Nothing like the face I was used to seeing on that pillow.

She didn’t smell like Rose, either. I slid an arm over her belly, breathed her in, then drew back and began to stroke in lazy circles. “Are you still going to Greensboro first?” Her grandmother lived there. Nana was old enough to be her great-grandmother, and to a woman of that generation, a granddaughter leaving for New Zealand was goodbye, a one-way trip.

I dipped my finger into her belly button, in and out. “Will you come back?”

I butted her arm. “From New Zealand.” The fellowship was for one year, extensible to two on mutual approval.

She arched so that her belly pushed into my hand and her head moved deeper into the pillow, and shadow. “Give me some incentive.”

(From So Lucky. Used with permission of MCD x FSG Originals. Copyright © 2018 by Nicola Griffith.)

See what others have to say about So Lucky.

Listen to an audio excerpt.

See where I’ll be reading and signing in support of the book in the next couple of months.

Posted on April 23, 2018 by Nicola Griffith in Uncategorized

8 thoughts on “Short excerpt from So Lucky”