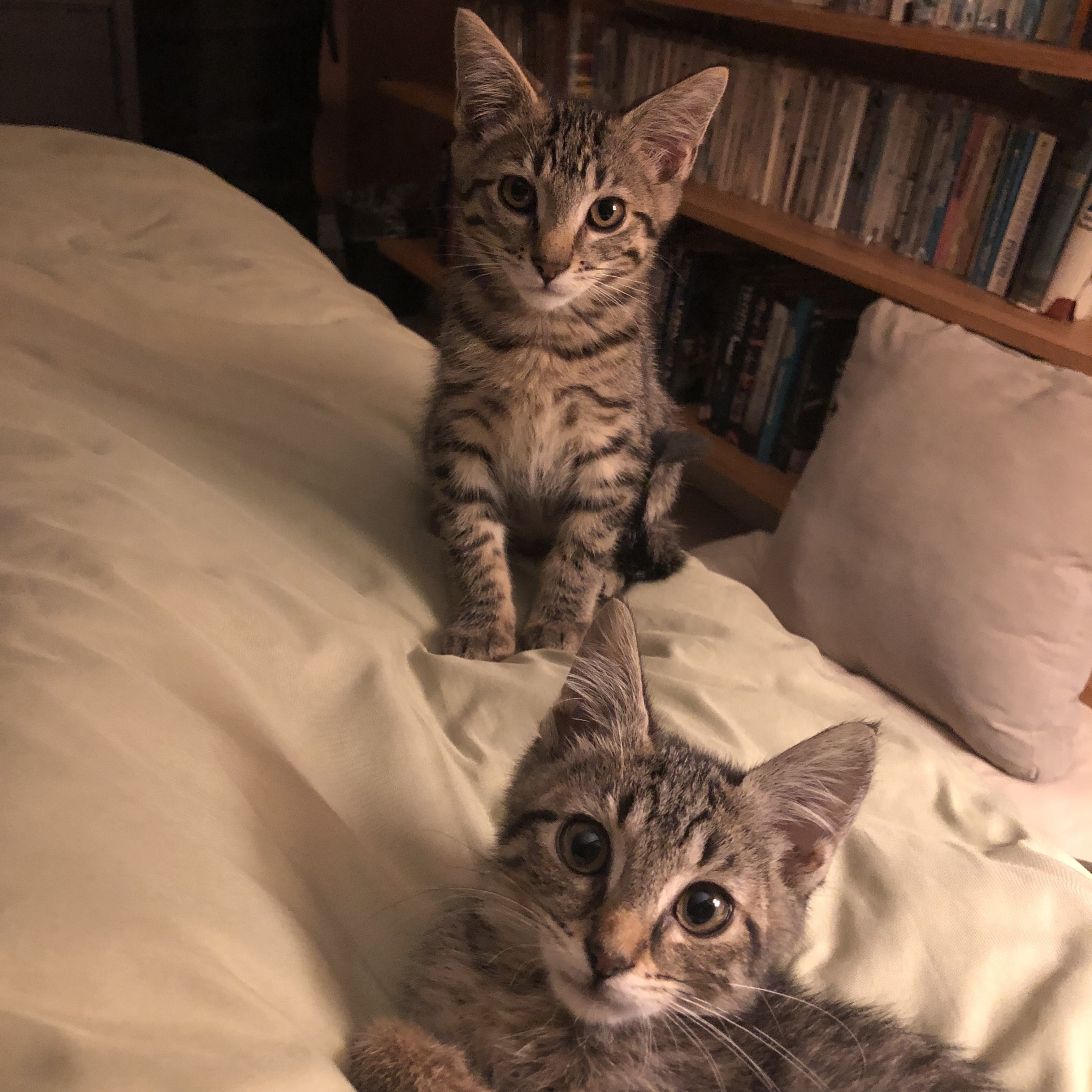 We haven’t had a cat since Zack died at the ripe old age of 17 in 2008. For the first year or so we just weren’t ready. And then our lives became unpredictable enough to not want to introduce kittens into the mix. But about two weeks ago, Kelley and I just looked at each other and said: It’s time. It took a bit to assemble kitten paraphernalia—toys, litter trays, kitty condo, food—and then to find just the right beasties to share our lives for the next twenty years.

Meet our new kitty overlords: brothers Charlie and George. They’re about 12 weeks old, sole survivors of a litter of six from Yakima. We met them at Seattle Area Feline Rescue, and within two hours they were in our house. Which, in the natural course of things, is of course now their house. They have kindly retained us as staff.

George, though bigger (he looks about 10 days older than his brother), is much more skittish. Charlie is fearless (not necessarily a winning evolutionary trait; he’s already crisped his eyebrow whiskers on the gas stove) and very happy to demand attention. Their coats are pretty different. George is more traditionally striped but Charlie is stippled. The first few days the only sound they made were odd little chirrups (George), with the occasional squeaking creak (Charlie). But in the last three days both have begun to essay the tiniest little mews. Both purr like buzzsaws.

Here’s a photo taken on their first morning. That’s the bathroom sink they colonised as a nest for the first few days. The picture’s fuzzy because every time I tried to get close they hid behind their kitty carrier, so this is an extreme iPhone zoom. 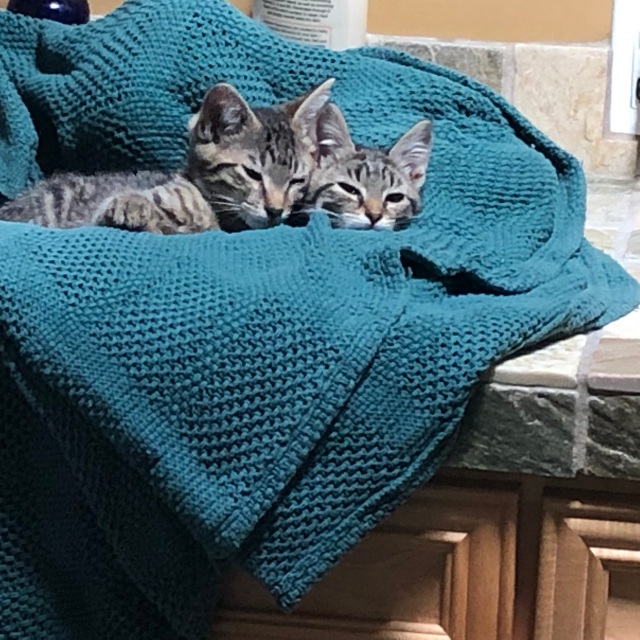 George on the left, Charlie on the right.

By the next day they were venturing into the family room—as long as they kept the bathroom and their comfort blanket in line of sight. Here’s Charlie finding the sofa for the first time (bathroom floor visible behind  him). 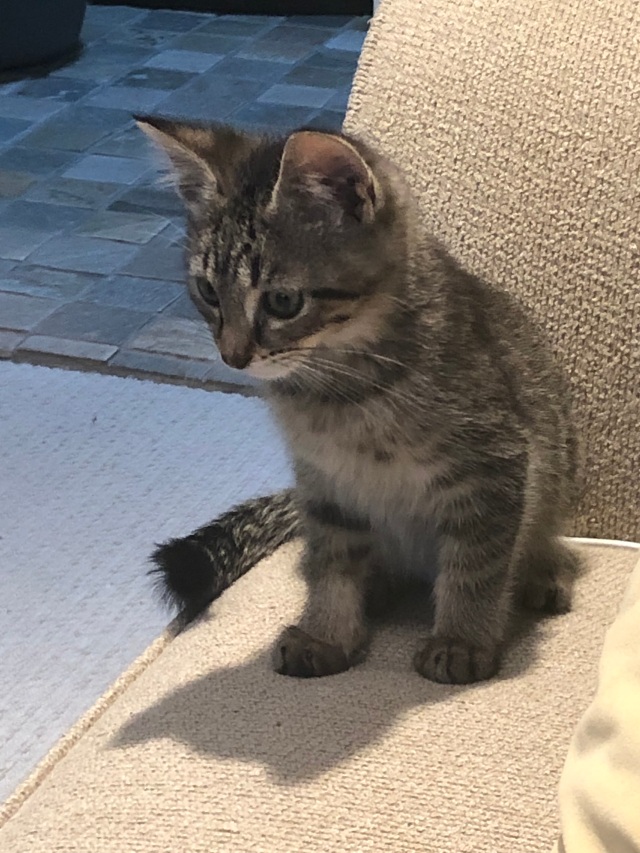 And this is George trying to decide whether or not to risk it. 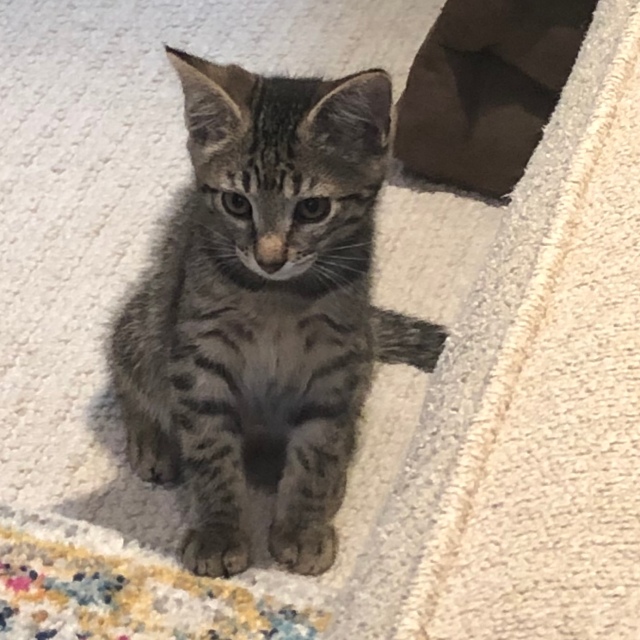 George worries about the sofa

A day or so later, they discover the bed: 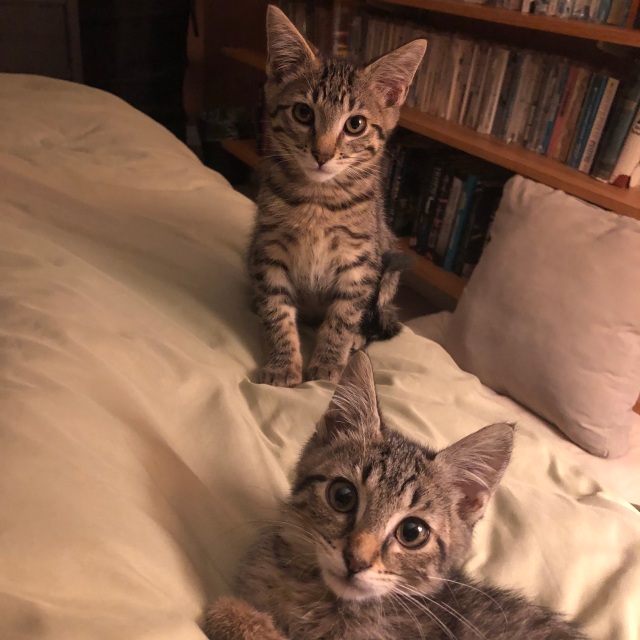 And at this point this most definitely rule the sofa.

Here are a couple of them looking particularly themselves, Charlie self-possessed: 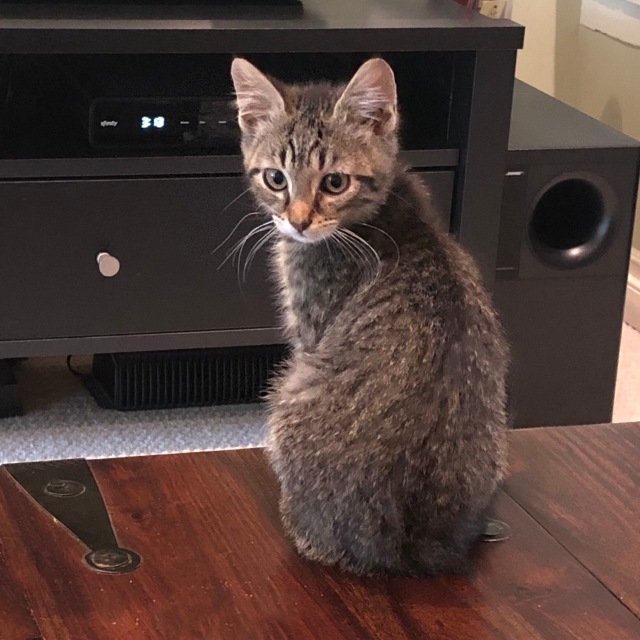 Charlie loves this trunk. It is the source of all toys.

And George a bit uncertain. 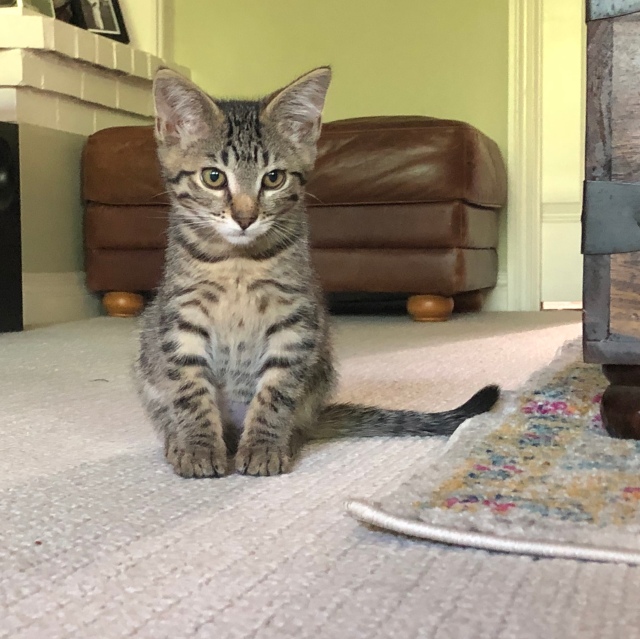 George just still isn’t sure. Of anything.

More to follow. Meanwhile I’ll be running around catching falling vases, rescuing stuck adventurers, and referring free-for-alls between rambunctious kitty-kind and impertinent feathers, while posting the occasional snapshot on Twitter and Instagram.

Posted on August 21, 2019 by Nicola Griffith in Uncategorized