Charlie and George have torn into the New Year and new decade with enthusiasm. They are still growing like magic beans. George is massive; Charlie seems tiny in comparison, but he weighs 7 lbs 10 oz—above average, apparently, for a cat his age: eight months. My guess is that George is now about 10 lbs, which is more than our last male cat, even in his prime, and it’s not fat. He’s going to be a giant, I think. You can see from this picture just how big he’s getting. Kelley has amazingly large hands but he makes them look small. 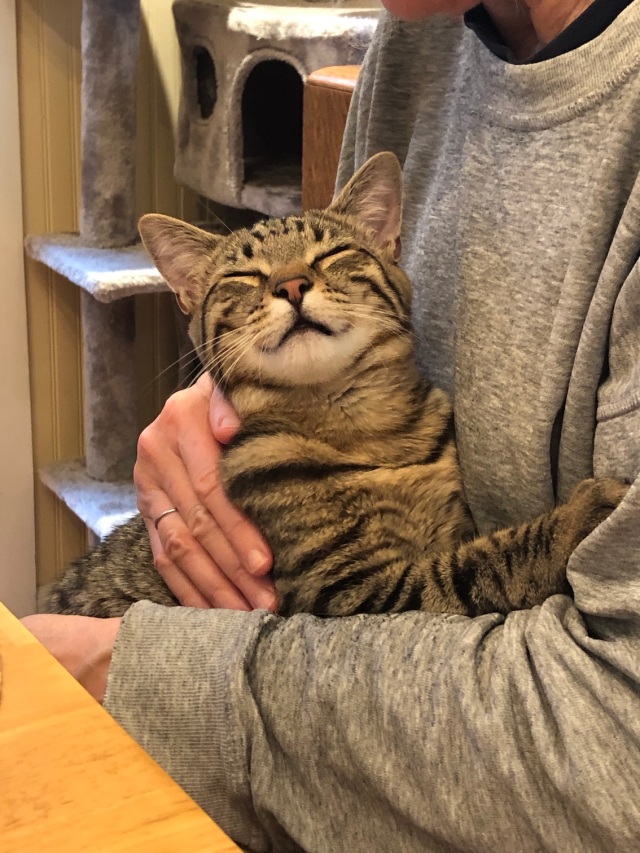 The reason we know Charlie’s exact weight is that we had to take him to the vet. He has some symptoms—snoring, a huffing grunt when he exerts himself, and excessive swallowing—that reminded me of when he was developing his polyp. The vet, however, thinks it may be a reoccurrence of the kitty herpes virus that leads to cold-like symptoms and upper respiratory inflammation—which is what leads to the development of polyps, but doesn’t mean he has a polyp yet. So we’re giving him prophylactic antibiotics, keeping a close eye on him, and crossing our fingers. Other than the symptoms above he is in fine fettle. As you can see by this photo, his build is quite different to George’s.

At eight months Charlie and George are, in human terms, about eight years old. That is, they can make basic sense of the world because they’ve seen a lot of it before but, oh, there is so very much still to see for the first time. Like snow. We all woke up on Monday morning to this: 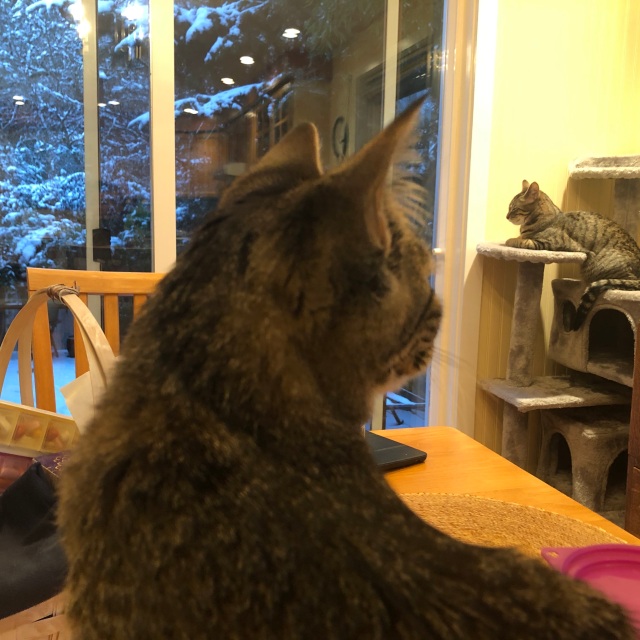 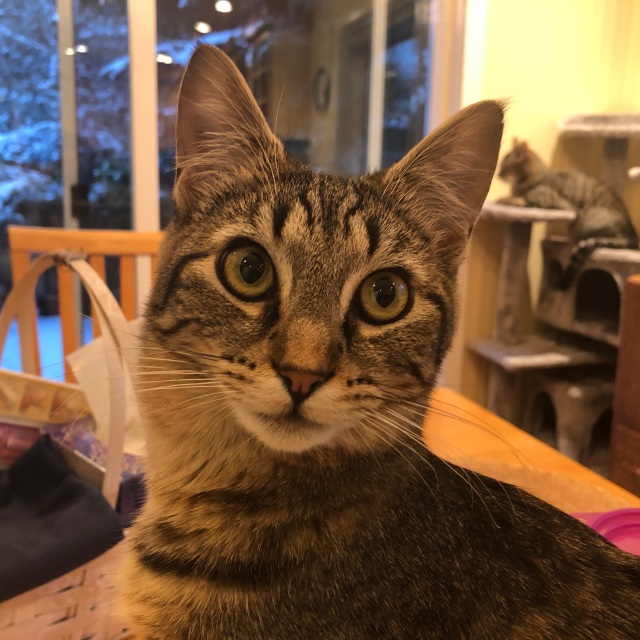 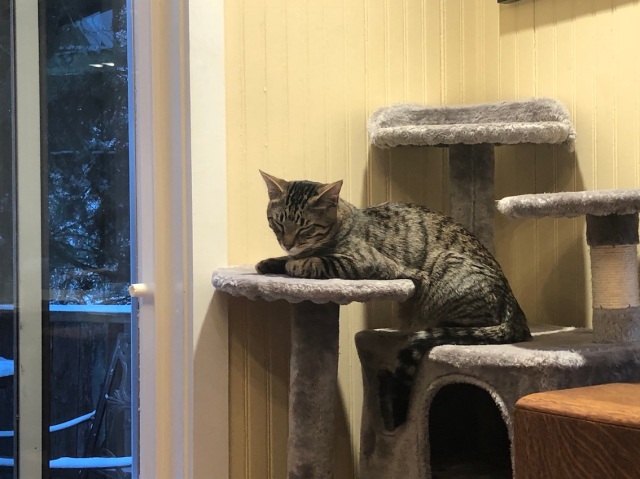 Eventually George mesmerised himself to sleep

Eventually they got bored and fell asleep. George is doing this a lot, with a particular fondness for being on his back with his legs in the air. And he looks so blissed out it’s almost as mesmerising watching him sleep as it was to watch him watching the snow. 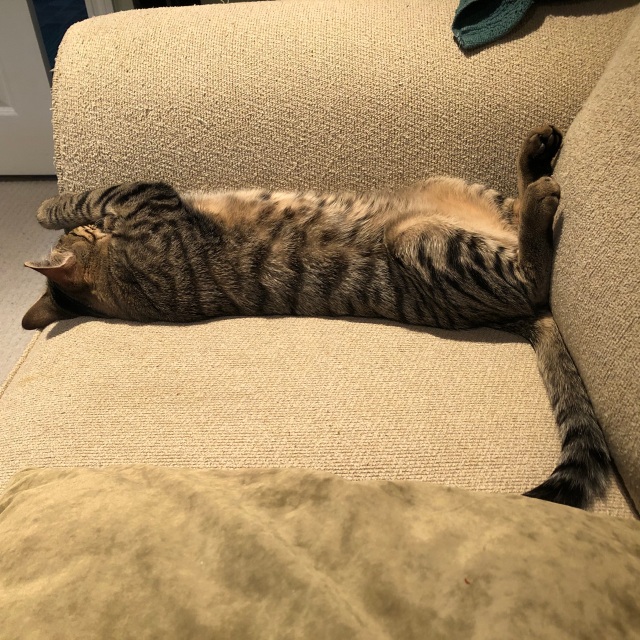 George measures the sofa in his sleep

George is getting way, way too big for that condo

Once the snow was gone, the cedar waxwings came back and they were then mesmerised by the flock.

They want those cedar waxwings 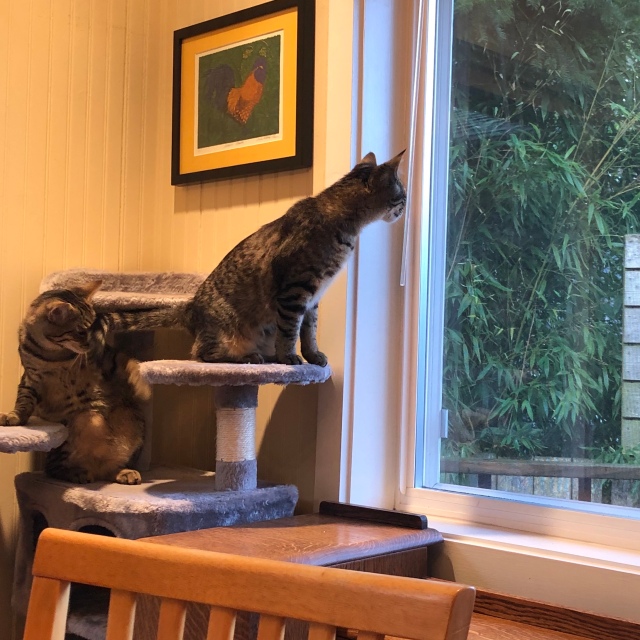 You can’t really tell from these photos but Charlie’s coat is quite different to George’s. George is a classic American Shorthair, but Charlie, well, Charlie isn’t.

Charlie has a lot of fur

Which can make him look deceptively soft and sweet

George’s fur is short and sleek

Charlie is being particularly active at the moment, leaping on everything, balancing—and sometimes not—on everything, and jumping off from there. 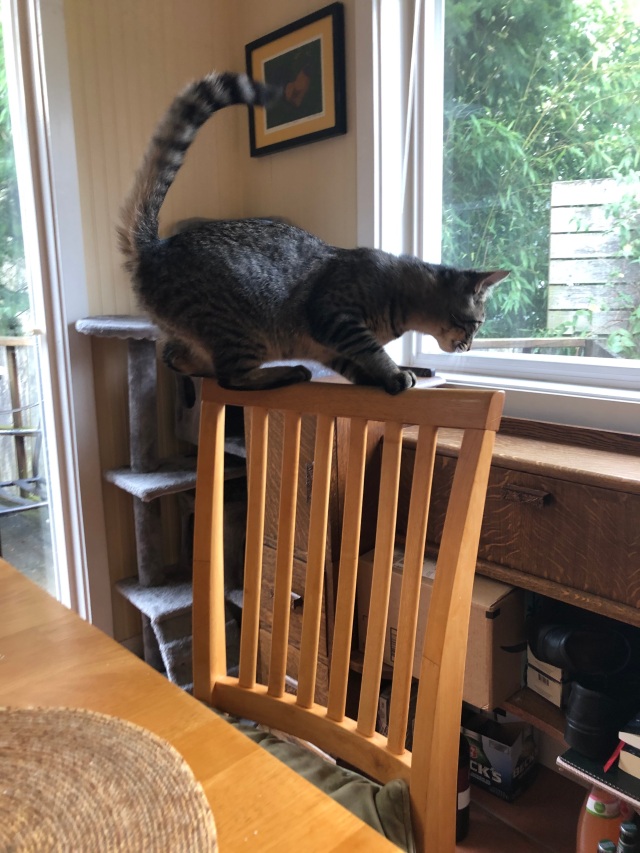 Charlie want to be one of the flying Wallendas

He’s taken to striking a Monarch of the Glen pose, standing on the kitchen table with his front paws on the back of a kitchen chair and looking tall and noble. But I’m never fast enough to catch that pic. Here’s he’s just coming down from it.

Charlie wants to be the king

But mainly, well, they’re cats; they sleep. The other day George spent hours sleeping on my desk, moving only to turn and sleep in the other direction as the afternoon drew on to twilight. George sleeps as I work

The rain pours down outside, I work, George sleeps on…

Back to back is good, as long as Charlie’s in front

And although George is so much bigger, it’s still Charlie who always takes point and sleeps in front of his brother, protecting him from the world.

Charlie takes point, as always, even in spooning bliss

So bottom line: the cats are happy, and growing, and getting on well with each other. Over the next decade there will, no doubt, be much mis/adventure and mischief to come. When anything interesting happens I’ll post about it. Meanwhile, feel free to go reread previous kitten reports.

Posted on January 18, 2020 by Nicola Griffith in Uncategorized