The cats have learnt to team up for hunting and escaper cats have been going outside. I have many photos of Charlie out there—he does love to pose. This is his resting demon face. 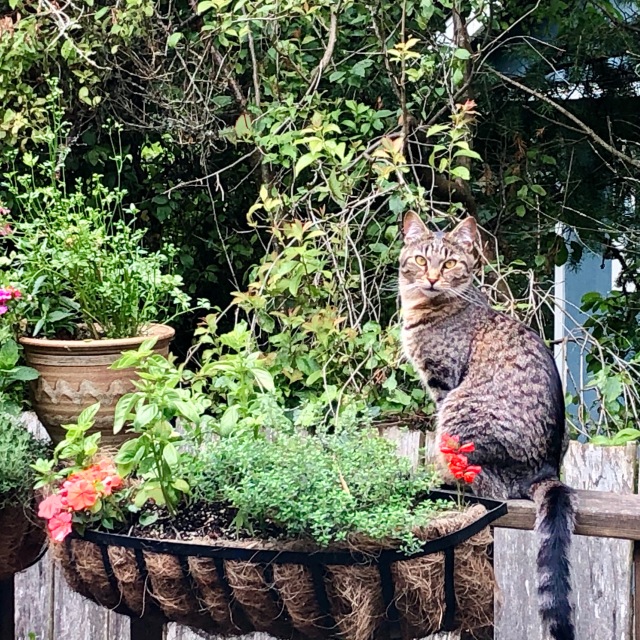 George I tend to only see when he comes in and goes to sleep.

What the shrews never see…

Our cats are too smart for their own good—well, certainly too smart for our good. Individually they’re very different and can manage different things. Lately, though, they’re learnt to team up, and together they are unstoppable. If you’ve seen the original Jurassic Park you will no doubt remember the pair of ferocious, wicked smart velociraptors that hunted the children as a coordinated pair. Charlie and George have started to do that team-hunting. They’ve been practising on the crows, which fortunately are older and wiser than they are; also, they can fly. But watching our wee ferociraptors, I am very, very grateful that I outweigh them by a factor of 10. Bear this in mind as I tell you the story of the cat door.

As you recall from the last Kitten Report, Charlie and George had their first venture outdoors. We kept them in for a while so we could all recover—we could do that with no worries because we’d blocked off the old cat door years ago when our last cat, Zack, died. But they had a taste for the outdoors now and they were determined to get out there again. and when Charlie fixes his will on something, it happens. So we bought a new cat door: the usual kind with a magnetic seal and a sliding lock.

The problem was, it was an extremely strong magnet, and Charlie (who is small) couldn’t quite manage it. We disassembled the door, took a look, and thought, Well, it should be easy enough to pop that top magnet out. Wrong. It was glued in, so in the end we had to break a chunk off the door. This meant a) there was now a hole in it, b) without the magnet it flapped crazily in the wind, and c) we could no longer lock it. But, Hey, we thought. That’s okay. Until the new door arrives we’ll just prop something in front of it when it’s time to close up shop.

So when it was time for them to be in for the night, we blocked the door with the heavy black mat covered in nonslip rubbery stuff that I usually carry in my wheelchair backpack as a portable tray. It’s heavy duty and difficult to slide aside. Then we drew the heavy velvet curtain over that.

Five minutes later we heard the plap of the mat going down and the creak-flap of a kitty busting out.

Fortunately he (Charlie) hadn’t gone far so we got him back in and propped a big heavy painting in front of it, with the heavy threshold mat up against that. Ha! I thought. Figure that out!

So then we propped the big painting, slid the threshold mat, and put a big dining chair in front of that.

They tried a few times but couldn’t manage it, so we went to bed and were just settling down when Skreeeek. Thump. Crash. Creak-flap. Out.

Now we were getting thoroughly pissed off. So next we propped the big painting, slid the threshold mat, and then wheeled my heavy wheelchair hard against the painting and put the brakes on. We went to bed. THEY DID NOT FIGURE IT OUT! Yodel of triumph!!

A week of happiness followed: cats allowed out after breakfast, in-and-out until 5 pm, then locked up safe for the night; bliss. Bliss for us, anyway. the small mammal population began to suffer: George likes shrews; Charlie prefers voles: he brought home three on Monday afternoon. Weirdly, neither seem that interested in the birds, or perhaps they’re just working their way up to that. They’ve been eying the bunnies that keep our lawns cropped (and the north garden very well fertilised, sigh) but so far haven’t caught one—or maybe they just couldn’t get it through the kitty door. 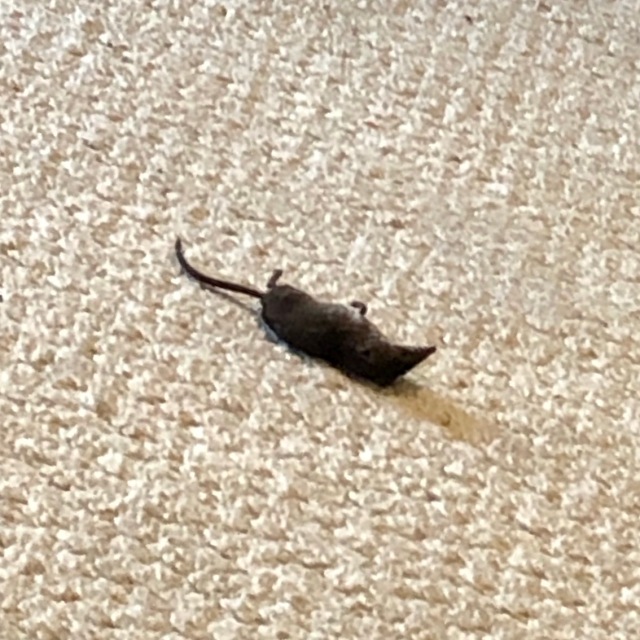 However, during the day the broken door with the hole it that flapped with every breath of wind was driving us crazy.

So we bought a new door. I figured out how to degauss the magnet—I weakened it enough that Charlie could push through it okay—and more to the point, it left the lock intact. So one night, instead of the picture, mat, wheelchair routine we simply…locked the door! And went to bed.

At three o’clock we woke up to find no cats on the bed and the house eerily quiet. We staggered into the living area and found they were outside taunting the coyotes (which, thank god, can’t climb onto the roof). We got them inside—eventually—locked the door, then sat and watched. George strolled over and pushed the lock open with his paw. We scooped him up and stuffed him in the bedroom before he could get through the door. Then we watched Charlie—who trotted over and opened the lock with his teeth. So now we were back to the painting and the wheelchair.

This was getting seriously old, because when the cats were safely locked in the house, I was too: I couldn’t use the wheelchair.

So I worked out how to build a physical block: a frame around the kitty door, with a door-sized piece of plywood that slides in, acting as a portcullis—a physical barrier. We couldn’t even need a lock. Then our handywoman, Sue—appropriately masked, gloved, and social-distanced, of course—built and installed it for us.

We slid the thing down: yay! High fives. Settle down with a beer, grinning, because we would not have to worry about the cats for the rest of the night. 5 mins later? George figured out how to push the portcullis up an inch with his nose, enough to get is head under it, and then flick it all the way up and zip out before the portcullis fell. Well, I thought. That’s an easy fix: lock the door, then drop the portcullis. Ha! I thought. Figure *that* out!

I forgot ferociraptor mode. Charlie watched George nose up the portcullis, then zipped in and unlocked the door with his teeth, and voilá! Team Houdini! And we were back to the painting and wheelchair. Oh, now it was on!

If cats with brains the size of a walnut can figure out how to escape, surely a woman with a fucking PhD can figure how to lock them up without locking herself up. Sue suggested a weird combo of pegs and clips and carabiners that would have made the door look like a Heath Robinson bank vault but would stop George lifting it with his nose. I was convinced there had to be a simpler, more elegant way to do it. So I looked at Sue’s collection of shims and bits of wood and tape and screws, and pointed out we could use double-sided tape to build a bottom l/edge to the portcullis frame without having to dismantle everything. And with a bottom edge, George wouldn’t be able to get is nose under it. He would have to figure out how to stand on three legs, half turn upside down so he could hook a claw into and *under* the <0.5 mm gap between ledge and portcullis, and AT THE SAME TIME get his nose in far enough to then get his head under, then flick it up with his head, while Charlie AT THE SAME TIME unlocked the door his teeth and squeezed out. Ha!

It’s now been three days and they haven’t yet figured it out. I dance in victory! (With my fingers crossed…)

Meanwhile, they’ve decided on another approach. We’re still mostly managing to get them inside by 5pm because any later than that and they turn into totally feral beasts and vanish into the wilds of the ravine—and we don’t see them until the wee hours while they play chicken with coyotes and barred owls and mysterious pools of sticky stinking stuff. Yesterday, though, was a lovely hot day here in Seattle, so in the early evening Kelley and I went outside on the back deck to enjoy a bottle of rosé and conversation in the delicious scent of our flowers and vines. The cats, of course, stayed inside. They. Did. Not. Like. That.

Charlie’s forte is social engineering, so that’s what he turned to: the repeated whang! whang! whang! of throwing himself at the portcullised door with a relentlessness designed to weaken our will to live, admit we’re lesser beings, and obey: that is, open the fucking door. George, however, decided that engineering engineering was the way to go. First, he stood on his hind legs and moved parallel to the slider by inching his front paws along the middle ledge, probing for structural weakness. As he inched along he gave us the evil eye (his head was above the divider: he’s a very tall cat) and made it plain he did not appreciate us taking our ease in *his* garden while *he* was stuck inside. Then he sat down, wrapped his tail around his toes, and settled in to think. It’s fascinating—you can practically see the gears turning. He looked at the door. He looked at us on the other side of the door. He looked at the door handle. He thought some more. When we went out to the deck, we had mysteriously been able to make the wall slide to one side by moving something near the handle, that is, the lever that locks and unlocks the slider. In the open position, the top of that lever is 42″ above the floor; I was not worried—until he went back to the door, stood on his hind legs, and stretched up. And up. And up some more and tugged on the lever. Result? He pulled it down—and locked us out. Well, fuck.

It’s a slider; it doesn’t use a key; we were not getting back in that way. The cats sat there looking smug: Now you know how it feels! And I could tell George was also thinking: If I can work out how to lock it, I’ll figure out how to unlock it one day when you’re not around and then it won’t matter about your locking cat door and your portcullis. It’s a very heavy slider; I sometimes find it difficult to open. Even if they both grow a bit ore, and even if they go ferociraptor on it, I’m sure they won’t manage it. Or pretty sure. So I’m not worried. What does worry me, though, is being trapped on the back deck. The other day was fine, because kelley was there, and she could walk around to the side deck where, fortunately, we had left the slider unlocked, and get in that way, and open the back door for me. If I’d been on my own—even if I was again lucky enough to forget to lock the side door—I’d be totally screwed: I can’t do the steps down from the back deck, then the steps up to the side deck. (Charlie likes to guard me on the side deck.)

Now we’re going to have to figure out a failsafe mechanism for the locking lever, too. Probably we’ll have to replace the whole locking mechanism and get one with a key, and keep a spare in my pocket at all times.

But for today? I’m so very tired of having smart cats. They, however, are cats: they do not get tired.

Posted on July 31, 2020 by Nicola Griffith in Uncategorized

Talk to me! Cancel reply

This site uses Akismet to reduce spam. Learn how your comment data is processed.